By Tristan McConnell with Nicolas Delaunay in Kisumu 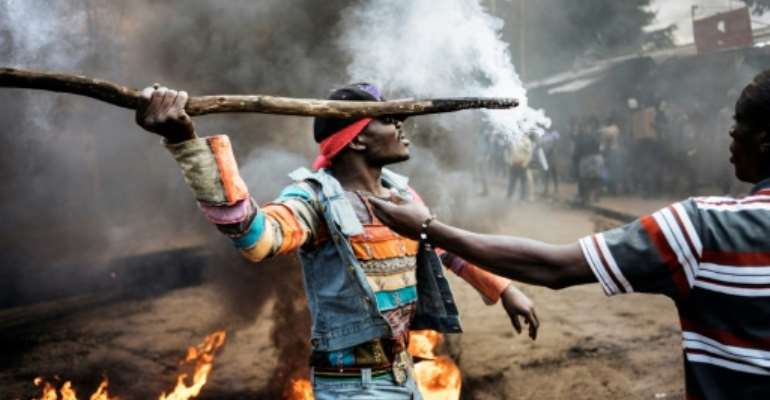 Opposition supporters demonstrate at a burning barricade in Kibera slum in Nairobi on the eve of Kenya's second election in two months. By MARCO LONGARI (AFP)

Kenyans began voting Thursday in a repeat election that has polarised the nation and is likely to be fiercely disputed in the absence of opposition leader Raila Odinga, who is boycotting the vote.

In stark contrast to the first edition of the election, which was annulled last month by the Supreme Court, many polling stations in the capital and Odinga's strongholds saw only a trickle of voters.

"It is my duty to vote. Last time the queue was all around the block and I waited six hours to vote, this time the people are few," said taxi driver David Njeru, 26, as he waited to cast his ballot in Nairobi's Mathare slum.

After a night of driving rain, only 50 people stood on the boggy grass outside the Redeemed Gospel Church polling station, where more than 8,000 are registered to vote.

The election is the chaotic climax of a political drama that began when the Supreme Court overturned the victory of President Uhuru Kenyatta in the August 8 elections.

It cited "irregularities" and mismanagement by the Independent Electoral and Boundaries Commission (IEBC).

Kenyatta, who turns 56 on Thursday, is almost assured victory after veteran opposition leader Odinga withdrew, citing fears the poll would be marred by the same flaws which saw the August vote overturned.

The boycott, in an acrimonious political environment marked by violence and intimidation, is likely to tarnish the credibility of Kenyatta's victory and open the vote up for further legal battles.

In Odinga's western stronghold of Kisumu, several polling stations remained closed, with one visited by an AFP correspondent chained and locked.

Ballot boxes and electronic kits to identify voters and transmit results had not arrived in polling stations, with some officials facing attacks from opposition supporters while trying to deliver voting material.

"We hope to be able to deploy later in the day. We hope for the best but prepare for the worst. The worst would be no election officials."

Despite the call for a boycott, one Odinga supporter Joshua Nyamori, 42, hoped to vote at the Kenyatta Sports Ground, but found no polling material or officials.

"I am concerned because not all people are staying home by choice, some people are afraid of being attacked," he said.

In his view, the decision of the opposition coalition National Super Alliance (NASA) not to take part in the vote was a "political mistake".

With eight candidates in the running, the vote was essentially a showdown between Kenyatta and Odinga, whose families have been locked in political rivalry for more than half a century. 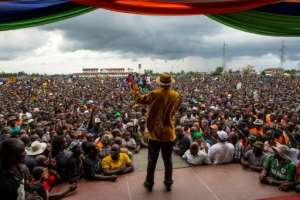 However Odinga gave a final address to supporters on the eve of the ballot, urging them to "stay at home" in a move likely to ease concerns over election day violence.

Opposition protests have resulted in at least 40 deaths, mostly at the hands of police and in poor opposition strongholds, according to rights groups.

The 72-year-old Odinga, who has lost three previous elections claiming fraud in two of them, said his coalition would transform into "a resistance movement".

NASA will "embark on a national campaign of defiance of illegitimate governmental authority and non-cooperation with all its organs," he declared.

The decision to cancel the August poll over irregularities in the electronic transmission of votes was initially hailed as an opportunity to deepen democracy in a country plagued by disputed elections.

But the re-run has been dogged by chaos and acrimony, prompting top diplomats to blast Odinga and Kenyatta for fuelling division instead of seeking a path to a free and fair election in this country of 48 million.

A myriad of legal battles failed to block the vote from going forward, with a final petition in front of the Supreme Court failing on the eve of the election due to lack of a quorum as only two of seven judges showed up.

The European Union observer mission, which like other foreign teams has limited its work due to security fears, said the poll's credibility had been "undermined" by the inability of the court to reach a quorum.

A statement signed by 15 foreign envoys from the United States, United Kingdom and several European countries, expressed disappointment that Kenya had not "come together to hold a better election".

"We are deeply disappointed by the continuing efforts of both parties to interfere with and undermine the independent operation of the electoral commission, the judiciary, and other essential institutions," said the statement.