It Was Not George Owusu’s Judgment Call 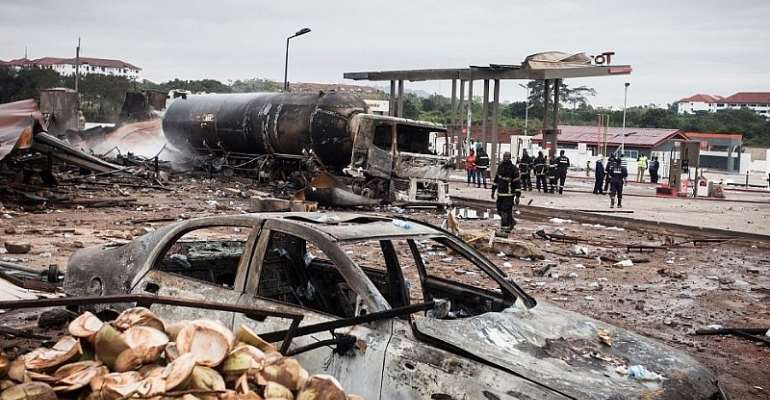 George Owusu is the owner of the Mansco Gas/Filling Station that caught fire and exploded and touched off another gas station explosion across the street at the Atomic Junction near the sprawling campus of the country’s flagship academy, the University of Ghana, on Saturday, October 7. He must be feeling very guilty about the tragedy that had, as of this writing, claimed the lives of some 7 people, injured some 132 people, and still counting. Over 60 people are presently known to have been hospitalized and discharged from various hospitals and health centers in the vicinity. More deaths from injuries are expected, though many of us are praying hard and hoping against hope for low casualty figures.

Mr. Owusu says that he feels guilty because, somehow, he saw Saturday’s apocalyptic inferno coming. He had warned the nearby Legon police, on the campus of the University of Ghana, that too many businesses had sprouted all around his gas station. And also, that, from longtime experience in dealing with the acute volatility of petroleum products, he knew that it was only a matter of time before a catastrophic event of Saturday’s proportions struck. Well, we don’t the sort response or reaction that the Mansco Gas Station owner got from the Legon police, because the reporter of the news story on which this column is based does not tell his audience. Very likely, not much had transpired between the complainant and the Legon police because this aspect of our national life and existence squarely falls under the purview of the Environmental Protection Agency (EPA).

And it darn well appears that the operatives of the EPA were literally asleep at wheel, as they have been known to have been doing for ages now. Then also, what happened in the Ayawaso West-Wuogon Constituency on Saturday, October 7, may very well have fallen under the purview of the Occupational Hazards Division of the Ministry of Labor. It could, of course, as well be under the jurisdiction of the Urban Planning Department of the Accra Metropolitan Assembly (AMA). Whichever government department or ministry is in charge of this area of our national endeavor has been sounded a clarion wakeup call. Indeed, knowing what I have come to know about the workings of our country for a remarkable while now, I am not holding my breath.

I am only hoping that the watch, or tenure, of President Addo Dankwa Akufo-Addo would be refreshingly much better than the watches of the previous four of Ghana’s Fourth-Republican Presidents, namely, Messrs. Jerry John Rawlings, John Agyekum-Kufuor, John Evans Atta-Mills, and John Dramani Mahama. Ghanaians do not deserve such abjectly neglectful treatment from their leaders and the political machines over which these leaders, invariably, smugly preside. I urgently urge the Akufo-Addo Administration to tackle this gas station menace with the same radical zeal with which it has gone about the war against Galamsey, or small-scale illegal mining, around the country.

I have also become personally and emotionally embroiled in this tragedy because I partly grew up at Kwabenya and was regularly bussed through the Atomic Junction area nearly every morning of the week to school, at the University of Ghana’s Staff-Village Primary School, right behind the Legon Police Station and across the street from the University of Ghana’s Hospital, between 1968 and 1971. In those days, the population of the country was much smaller than it is right now, and the area now occupied by the Presbyterian Secondary School (PRESEC) was very sparsely peopled. In fact, one could drive past Atomic Junction most mornings without sighting a single human being.

The Haatso Community was also then composed of a couple of hamlets, and one had to pass under a giant hedge of hibiscus to reach these hamlets whose owner or owners and the handful of residents raised chickens for sale. There are, of course, other quite interesting stories to tell about the Real Ghana Atomic Energy Commission (GAEC) and its exclusive residential and rigidly segregated settlements in those days in due course.