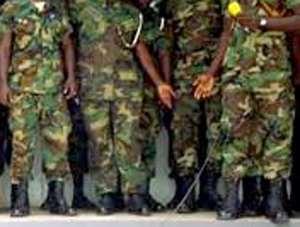 The idea, staunchly championed by Mr. Kennedy Ohene Agyapong, the Assin-Central Member of Parliament of the ruling New Patriotic Party (NPP), that members of such pro-NPP vigilante groups as the Invincible Forces, the Delta Forces and the Kandahar Boys be recruited into our national security agencies is one that must be taken with the proverbial pinch of salt (See “NDC Members at National Security Sabotaging Government – Kennedy Agyapong” MyNewsGh.com / Ghanaweb.com 4/4/17).

It must be taken with great caution because the last thing that any serious government wants to indulge in is the inordinate politicization of our national security apparatus. The fact that the operatives of the erstwhile Mahama-led regime of the National Democratic Congress jampacked our security agencies with party apparatchiks, does not mean that the Akufo-Addo-led New Patriotic Party Administration ought to follow the same primrose path. That would merely vindicate the argument of those critics who believe that fundamentally speaking, the country’s two major political parties are practically not any remarkably different from one another.

When it comes to the Constitution or the composition of our national security system, the first and utmost priority has to be professional competence, and not the rather crude and vulgar need to provide convenient and immediate job opportunities for the boys, as it were. There must be a set of principles and criteria that go far beyond ideological partisanship. The country does not belong to the operatives and supporters and members of any one political party. I perfectly understand the need for rewarding these sacrificial young men and women who put their very lives on the line for the achievement of a hard-fought victory for the New Patriotic Party.

But the first employment requirement must be based on whether candidates for recruitment into any of our national security apparatuses have the sort of discipline and knowledge that the job requires. For instance, you would not just pick anybody from the streets and recruit him/her into the Ghana Police Academy. The applicants must possess at least the minimum qualification of a Senior High School Diploma or Certificate. They must also be of balanced temperament and a sound mind. These may not necessarily be the criteria by which members of the Invincible Forces, the Delta Forces and the Kandahar Boys were recruited into the service of the then-main opposition New Patriotic Party.

The requisite skills training ought to be put in place for these militant party operatives, and this could take anywhere from about three months to maybe 18 months. But I perfectly agree with the Assin-Central MP that any political appointees who may be deliberately and systematically thwarting the smooth-running of our national security agencies must be promptly disposed of. But their culpability must first be proven beyond the reasonable shadow of a doubt; and merely being a card-carrying member of any political party other than the ruling New Patriotic Party, ought not be part of any test of professional incompetence or administrative liability.