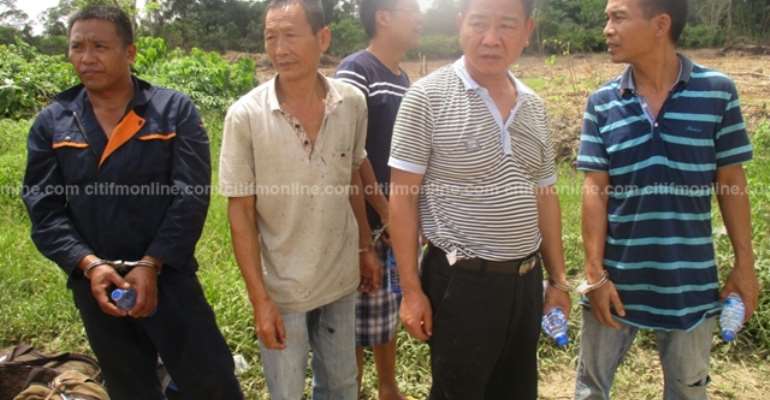 Police in the Western Region have arrested five Chinese nationals together with four Ghanaians for illegally mining for gold in River Ankobra at Bamianko Dawule in the Nzema East Municipality.

The swoop, which was carried out by a joint security team from the regional CID and the Rapid Deployment Force under the supervision of the regional police commander, DCOP Kwesi Duku, was after community members from Bamianko Dawule reported the presence of the Chinese miners and their Ghanaian counterparts on the Ankobra River.

Speaking to Citi News, the Public Relations Officer for the Ghana Police in the Western Region, ASP Olivia Awurabena Adiku, noted that “the suspects were immediately put before the Sekondi District Magistrate Court, but have been remanded into police custody to reappear on 27th March, 2017”.

“Investigations have started into the incident. We are liaising with the Ghana Immigration Service to know the status of the Chinese nationals involved and when that is determined, we will take it from there”. ASP Adiku added.

The Ankobra River is heavily polluted by the activities of illegal miners.

The river, apart from being the source of fish for the many communities dotted around it, is also the source from which the Ghana Water Company Limited at Axim in the Nzema East Municipality, draws raw water for treatment and onward supply to the Municipality and the Ellembelle District.

ASP Olivia Adiku further stated that, the police in the region “is determined to flush out illegal miners on all rivers in the region to ensure that the rivers are back to their former state”.

Rawlings came through for me in my difficult moments as Pres...
41 minutes ago