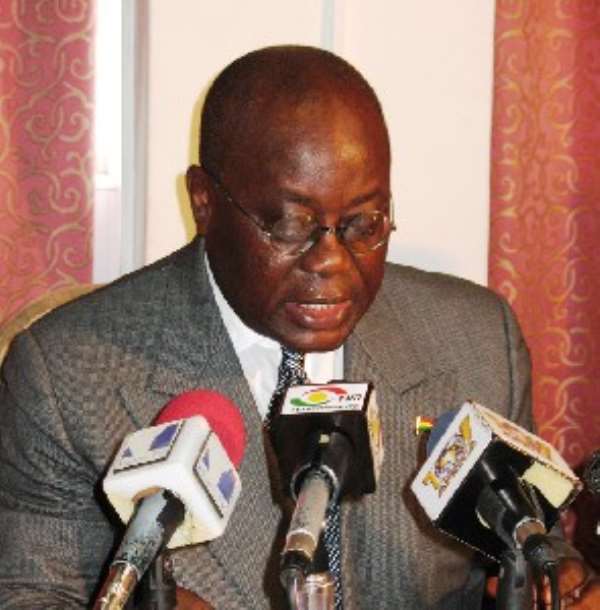 Your Excellency,
Greetings to you from Sampa in the Brong Ahafo Region of Ghana. I believe you became familiar with the name during the season of election since the whole of Ghana was waiting on us to finish voting. I guess you may be wondering where Sampa is exactly located. I will not blame you much because the towns and cities you visited during the campaign season were quite many.

Before I brief you on the District of Jaman North, I wish to state that this piece of writing is not a political critique from your usual opponents in opposition and should never be considered as such. I am not writing this piece as a stalwart supporter of a political party but as a concerned citizen of Ghana; as a citizen and not a spectator.

The Jaman North District is one of the twenty eight Districts created under the Legislative Instrument (LI) 1779 of 2004. It is strategically located to the Western part of the Brong-Ahafo Region of Ghana and to the North- Western fringes of the neighbouring Coted ‘Ivoire.

It shares local boundaries with Tain District to the north through to eastern part of the District, Jaman South District to the south- west and Berekum Municipal to the south- east. The district indisputably leads in cashew production. It is reputed to be the largest producer of cashew nuts in the country.

Considering the District’s
monumental contributions in the field of agriculture to the economic development of our dear country, the district is still in a deplorable state. I hereby write to draw your attention to the persistent and consistent deteriorating nature of its District capital, Sampa. These challenges faced by the indigenes of Sampa and its environs need to be responded to with immediate effect.

Nana, roads at Sampa and its
environs are in a deplorable state and are not easily traversed by vehicles which is severely affecting economic activities in the district.

The poor state of the roads in Sampa not only poses a challenge to the economic and trading activities but also described as a death traps for drivers and traders who ply the roads on daily basis.

The “unmotorable” nature of roads like Sampa to Duadaso road has made many a citizen to ask whether these towns are indeed part of the country.

The nature of our roads has made our District to be an enemy to most drivers especially in the season of harmattan since they do not want to be bathed in a barrel of dust.

The few who are zealous and
worried of where the next meal will be coming from are forced to keep vegetables like garden eggs, tomatoes and okra in the muddy market hoping that some people will still pass by to buy their vegetables. “Sweeping at the market becomes extremely difficult anytime it rains because of the muddy nature of the market” complains a Zoomlion employee.

The market of Sampa is nothing
good to write home about during the harmattan season. The sun becomes extremely scorching leaving the traders to suffocate to death in their own sweat. The buyers and sellers have no other choice than to inhale the clouds of dust which engulf the entire market. In a typical harmattan season, it becomes very difficult for one to differentiate between the tomatoes which are openly displayed on the ground and the dust.

The market of Sampa, if given the necessary attention will inarguably be one of the best market centres in the Brong Ahafo Region of Ghana.

I have no doubts that the market of Sampa can rock shoulders with the markets of Sunyani and Techiman in terms of revenue generation if given a facelift.

Nana, it is worth noting that Jaman North District with Sampa as its capital, leads in cashew nuts production in the country but unfortunately, these produce are exported annually in their raw state by local and foreign merchants to the meagre benefit of the farmers and the nation as a whole. These cashew nuts are useful in so many ways. Cashew nuts are used for cashew nut paste and oil.

I will not bore you with much
words. I know there are other
national issues of equal importance but these challenges faced by the people of Sampa can’t wait for the next four years. They need immediate attention.

As I conclude this letter, I can hear the groaning and grudging of the ladies and gentlemen of Sampa showing that they are tired of always resorting to the wearing of black and red T- Shirts as the only means to combat dust in the town. The trader at the market centre is tired of being bathed with mud anytime it rains. I can also hear the cry of the food vendors who are always suffering from catarrh all because of the dusty nature of the roads.

Finally, I can hear the heart-
breaking cry of the cashew farmers in towns like Jamera, Kokoa, Bonakire, Kabile, Duadaso, Suma-Ahenkro all in the Jaman North District of the Brong Ahafo Region of Ghana.

I believe without an iota of doubt that you will pay heed to the cry of the masses and come to our rescue.

Yours sincerely,
Elvis.
A concerned citizen.
I BELIEVE IN THE RISE OF A NEW GHANA.
THE WRITER IS EFFAH ELVIS, A
STUDENT OF THE UNIVERSITY OF CAPE COAST.