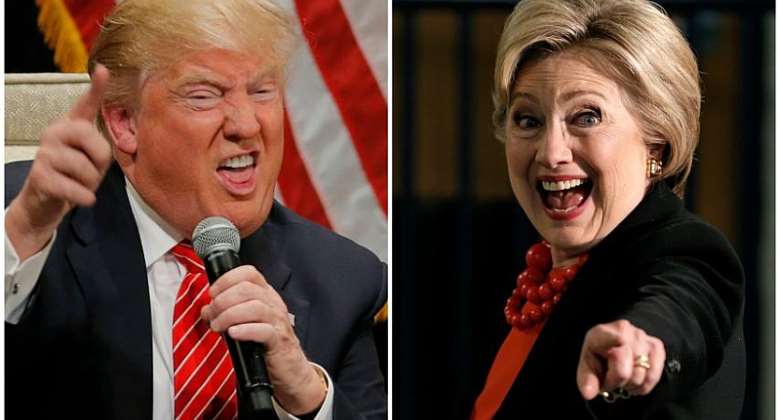 Much to the incredulity of the elite political class, Donald Trump is within the margin of error of Hillary Clinton's lead. Trump can stumble. Hillary could reboot and change the calculus. That said, right now: advantage Trump.

It gets harder with each passing day to change the fundamental dynamics of the race. The core dynamics of this are masked by a mainstream media preoccupation with non-issues such as Clinton’s walking pneumonia, Trump’s acknowledgement that Obama was born in Hawaii, and so forth.

Above all, now, the voters care about the American Dream, composed of two elements: Prosperity and Economic Justice.

Both are legitimate and essential.
Trump leans heavily toward prosperity. From his prepared remarks for his recent speech to the New York Economics Club:

We are the nation that tamed the West, dug out the Panama Canal, won two World Wars, and put a man on the moon.

It’s time to start thinking big once again.
That’s why I believe it is time to establish a national goal of reaching 4% economic growth.

In working with my economic team, we’ve put together a plan that puts us on track to achieve that goal. Over the next ten years, our economic team estimates that under our plan the economy will average 3.5% growth and create a total of 25 million new jobs. You can visit our website to see the math.

That’s a great message. Progressives doubt the messenger. They attack Trump as proposing to deliver a disproportionate share of the goodies to the wealthy. That charge is not obviously true.

Trump was the one Republican candidate during the primaries who drew a line in the sand against cutting Social Security benefits. He threatens punitive action against Big Business for shipping jobs to cheap labor places like Mexico. Believe it or not … like it or not … the message “I’m with you” resonates with workers. (Full disclosure, I’m proudly a dues paying member of the AFL-CIO.)

I’ll take a boss who breaches etiquette but offers raises, bonuses, and opportunity for promotions. That’s preferable to one who has excellent manners but would manage the company – America — so there was no way up for me. I’d rather have a boss who was committed to making the company — America — great, giving me both pride and a fighting chance to rise.

Clinton leans heavily toward economic justice. That’s admirable. That said, she’s been deficient in charting a course toward prosperity to go with it. As Churchill once said in a speech in the House of Commons (22 October 1945), “The inherent vice of capitalism is the unequal sharing of blessings; the inherent virtue of socialism is the equal sharing of miseries.” JFK, on the other hand, said, “a rising tide lifts all boats.”

I am not here implying in any way that Clinton is a socialist. That said, the progressive policies she proposes, perhaps reluctantly due to her battles during the primaries with an authentic democratic socialist, carry rather more the whiff of shared misery than the vim and vigor of a rising tide. And after eight years – sixteen, to be fair – of sharing miseries, more misery, even virtuously shared, is not what the majority of voters want.

As to peace, Clinton is far more warlike. She voted for the invasion of Iraq. She played the critical role in persuading Obama to destroy Libya, making more room for Daesh, a/k/a ISIS, to enlarge its footprint. She unsuccessfully advocated for destroying the Syrian state.

Enough war. The voters want less, not more, even if war may be motivated by humanitarian sentiments.

Trump, on the other hand, has been consistent in reserving America’s military might for tightly targeted military action and seeking harmonious relations with China and with Russia. Trump, in his first major foreign policy address :

We desire to live peacefully and in friendship with Russia and China. We have serious differences with these two nations, and must regard them with open eyes, but we are not bound to be adversaries. We should seek common ground based on shared interests.

Russia, for instance, has also seen the horror of Islamic terrorism. I believe an easing of tensions, and improved relations with Russia from a position of strength only is possible, absolutely possible. Common sense says this cycle, this horrible cycle of hostility must end and ideally will end soon. Good for both countries.

Some say the Russians won’t be reasonable. I intend to find out. If we can’t make a deal under my administration, a deal that’s great — not good, great — for America, but also good for Russia, then we will quickly walk from the table. It’s as simple as that. We’re going to find out.

Fixing our relations with China is another important step — and really toward creating an even more prosperous period of time.

…Our goal is peace and prosperity, not war and destruction.

Meanwhile, much has been written about the relatively greater tactical – or at least logistical — competence of the Clinton campaign. That’s not inconsequential.

That said, consistent with Clinton’s old school militancy, her campaign appears rooted in “Overkill.” That was good for winning World Wars I and II but also proved a losing formula in Vietnam. She appears tone deaf to what we learned about winning with guerrilla tactics from the young David Petraeus. As I wrote here in criticizing the Republican consultant class, who, sure enough relying on “Firepower,” lost to Trump:

The first rule of the new style of war, as of the new politics (wars being, as Clausewitz observed, politics by other means) is “You’ve got to have the people on your side … if you want to win….” This was voiced by the character Pierre Raspeguy in a novel about the loss of French Indochina, The Centurians by Jean Lartéguy . That novel, in the hands of David Petraeus (and many other counterinsurgency military theorists), helped redefine modern American military doctrine. It holds the key lesson.

That lesson — You’ve got to have the people on your side … if you want to win — applies with at least equal force to politics. Trump seems to get it. Clinton, not so much.

Moreover:
Asked at a press conference what it took to defeat an insurgency, Westmoreland answered with a single word: “Firepower.” Big-unit war backed by firepower was Westmoreland’s strategy for beating the Vietcong, and nothing ever altered his view.

The root error behind Westmoreland’s failure was the general’s belief that the enemy’s main force units were the problem, and that he could hammer out a win with a strategy he called “search and destroy.” The idea was General William DePuy’s, who had noted a ten-to-one kill ratio that favored Americans in early battles of the war. “We are going to stomp them to death,” DePuy told a reporter. …

… Nick Turse … reminds us again of what Americans mainly prefer to forget. … orders issued by Captain Ernest Medina before an attack in March 1968 on a Vietnamese village variously known to history as Pinkville, Son My, and My Lai.

“Are we supposed to kill women and children?” one of his men asked.

“Kill everything that moves,” the captain replied.

Clinton and her campaign are pounding Donald Trump and his supporters every chance they get. Vilifying Trump supporters as a basket of deplorables is “Firepower.” She is stuck in a kind of “us against them” mode. Her authentic sweet, nurturing, side is curiously absent.

Pity.
The Clinton campaign prefers to project her toughness and competence, and she often comes off as a common scold. That is not really appealing. Notwithstanding his occasional boorish comments Trump is presenting as the more nurturing of the two.

This is why Trump could be viable.
Clinton is not adept at “getting the people on her side.” Trump is harshly critical of Clinton, yes. That said he spends the vast majority of his air power proclaiming his love for people and promising to fight for their interests and dignity. He is shrewdly employing the essential doctrine of guerrilla warfare in his campaign: You’ve got to have the people on your side … if you want to win.

If Trump’s message is one of equitable prosperity while Clinton leans too far left it is likely that Trump will break out in an unstoppable surge to the White House. Getting the people on your side beats "Firepower.

A version of this column originated at Forbes.com