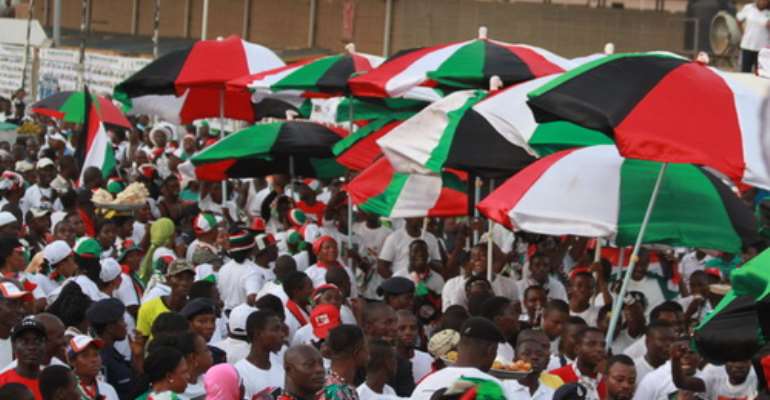 Desperate situations, it is said, invite desperate measures. Following the NDC's electioneering gospel so far, it will be no goof for any sane observer to ratiocinate that dreadful symptoms of defeat are legibly inscribed in the ruling party's campaign messages and this suggests the gloom and doom that await the party's fate in the forthcoming elections. Apparently, these are barnstorming stratagems of a failed government that has nothing better to put into the tired ears of the electorate. To save readers of this article the labour of having to travel through a prolix story to exhume the substance of my argument, I'll put just three of these campaign messages here.

Somewhere in Prestea, one of the mining communities in the Western Region, and also a hub of all illegal mining activities, popularly known in our local parlance as 'Galamsey' (a corruption of the expression, "gather them and sell"), the NDC have already been there to place their perfumed and toothsome promise on the tables of the residents, much to the elation of galamsey patrons who bought the meal hook, line and sinker. The party's stalwarts who were there to deliver the message did not only warn the 'galamseyers' to be wary of the NPP as voting for them will amount to bringing their illegal mining operations to a tragic end, they also pledged to provide them the necessary tools and equipment that will make illegal mining in the community a better and more lucrative venture.

Also in Kwesimintsim, Takoradi, a similar story repeated itself on the campaign platform when the party's parliamentary hopeful, Augustine Arthur, was being out-doored to the constituency. "I was once a policeman and I will use my position as a Member of Parliament to connect most of you to the Ghana Police Service and other national security services when I'm voted into power" These are the words of Augustine Arthur, the NDC's parliamentary aspirant for Kwesimintsim Constituency. Whoever takes this with a pinch of salt may want to contact Totobi Kwakye and Solomon Nkansah. They were both on the campaign platform when this nepotism-clothed utterance was being made.

In other news, the National Communications Director of the party, Solomon Nkansah, stood on a giant campaign platform in Takoradi and gave it to the youth in strong terms of recommendation to embark on stowaway, an illegal sea trip, without trepidation as the NDC will make the escapade even better should their mandate be renewed. This, we are told, will be made feasible by making security situations at the various vantage points of our ports less-tight and stowaway-friendly.

I'm neither moved nor perturbed by the torrential promises the NDC are pouring onto the political streets. As far as my 'short memory' is concerned, I can't recall the last decade a Mahama-led NDC administration walked a single talk. But the impunity with which the NDC are promoting illegality and nation-wrecking acts in the name of campaign message is an acute betrayal of common sense and this calls for outright condemnation. If the NDC believe they have done a phat job in the last eight years, they should give their own 'Accunting to the People' Green Book the opportunity to speak loud of their achievements and spare us the jibber-jabber that points to no particular direction.

As much as they are hungry and desperate to retain power, they should not lose sight of the fact that whatever garbage they are throwing on the streets will have ruinous implications on the future of mother Ghana. Our politicians have it as a religious and civic responsibility to ensure that their hungry bellies do not misguide them to toe a line that has any potency of pulling down the nation we are all making efforts to build. Wisdom is profitable to direct.