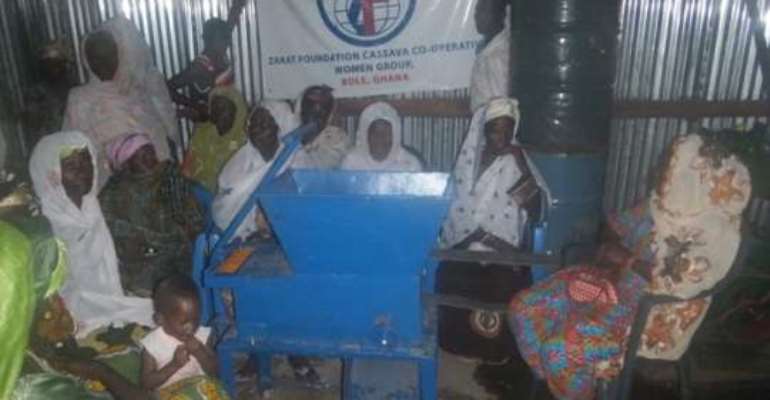 By Elsie Apiah-Osei, GNA
Bole (N/R), Sept. 6, GNA - The Zakat Foundation of America (ZF), an Islamic non-governmental organisation (NGO), on has donated a Gari processing machine and its accessories to a group of women at Bole in the Bole District of the Northern Region.

In addition to the equipment, ZF also presented a seed capital cash of GHÈ¼5,700.00 to support the women procure raw materials to start business.

Mr Habib Abubakar, the Country Programme Manager of the Foundation, who made the presentation, said it was part of the livelihood improvement and human development responsibilities of ZF to respond to the needs of the less privileged in the society especially women.

He said the donation formed part of an earlier donation to 40 cassava co-operative group in 2011 at Jugboi to expand their cassava processing business.

'We have done this in 2011, but this particular event taking place today, is the first ever showing concern for persons particularly widows.'

Mr Habib added that the donation was also a way of ZF fulfilling its commitment to support the poor, needy and socially marginalised groups in the society.

'There is the need to make the less affected feel at home and always know that people care for them wherever they find themselves.'

Mr Mahama Abdulai, the District Assembly Business Development Officer, who represented the District Chief Executive, called on other benevolent individuals and organisations to collectively collaborate and bring the challenges that face individuals especially widows to an end.

He advised the beneficiaries to take good care of the facilities through continuous maintenance and cleaning of the environment.

Madam Affisatu Wahab, the Chairperson of the group, receiving the donation, thanked ZF for the support and appealed to other groups to emulate the kind gesture.

She noted that the donation was good and it would help the beneficiaries to meet their needs.

Zakat Foundation of America is an Islamic charity organization based in Chicago, United States, and support's community-based groups and organisations including women and socially marginalised groups in the society.