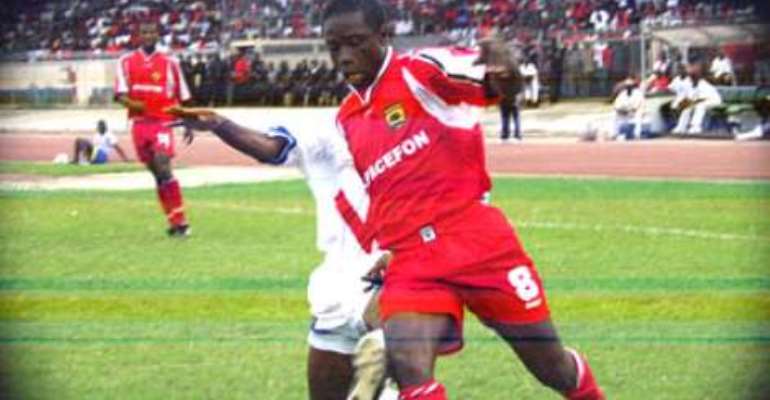 On 9 June, 2004, he teeming supporters of Ashanti Gold FC went gay as their idol club walloped the defending league champions Asante Kotoko 4-1 at the Len Clay Sports Stadium, Obuasi in their crunch Zone A encounter.

Valentine Atem, the Cameroonian import was the toast of the fans, after he scored twice and exhibited extraordinary display on the evening.

Ofosu Amoah and substitute Awudu Ronaldo also registered their names on the score sheet to give the hosts a resounding victory.

Ironically, it was Kotoko, who drew the first blood from an Aziz Ansah's well-taken spot kick after he had been brought down in the "18" by Tony Baffoe in the 23rd minute.

However, Ashanti Gold restored parity before the end of the first half from Valentine Atem's spot kick

After recess, Amoah took on the seemingly hypnotized Kotoko defenders- believed to have been caused by some rituals performed by a lame man in the goal post of Kotoko during the break - to increase the score line to two in the 62nd minute.

Substitute Ronaldo who came on for George Eranio in the 66th minute made it three when he beautifully completed a two-man move between Atem and Shaibu.

Atem was on hand to complete the demolishing exercise after going through a forest of legs before beating helpless Owu.