The Misguided Albino Is Still Raging and Ranting 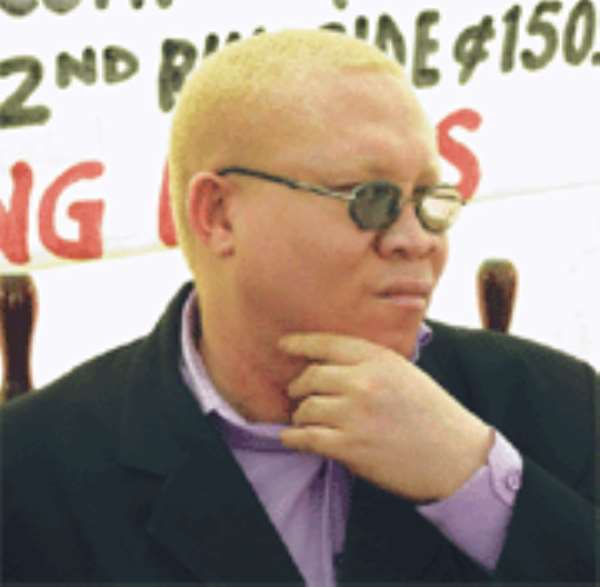 He may very well be a genius at his legal practice and quite a good law lecturer at the Ghana Law School, but when it comes to the exhibition of academic and professional integrity, the Oxbridge-schooled Mr. Moses Foh-Amoaning may still be at sea and out of his league (See “Homosexuals Should Not Have Rights – Foh-Amoaning” Ghana News Agency/Ghanaweb.com 3/16/16). Some time ago, when I pointedly called for him to regain his presence of mind, or more directly to promptly seek the services of a clinical psychologist or a psychiatrist, one reader of my column who automatically assumed Mr. Foh-Amoaning to be of Asante ethnic descent – I have since been reliably informed that Mr. Foh-Amoaning is of Akyem stock of some sort – wrote to caustically lambaste me for what he termed as my Akyem untrustworthiness as an Asante ally. Well, I dare not tell you who I am thinking about, dear reader, or dare I?

In reality, I have never considered myself to be either an Asante political ally or the ally of any other ethnic group for that matter. What I have categorically said, and continue to say, is that absolutely nobody exists in Ghana today who can confidently boast of being either a more authentic Akyem or Asante than Kwame Okoampa-Ahoofe-Agyeman. My Akyem-Asiakwa stock, or descent, ought to be evidence enough.

I am not presently in the mood for historical exposition, and so I shall reserve this one for a more appropriate occasion in the near future. But what I wanted to say before the preceding elucidative aside intervened in this write-up, vis-à-vis the crusading madness of Mr. Foh-Amoaning, is the scandalous fact of his near-total lack of common sense, professional and academic integrity.

On the lightning-rod subject of homosexuality, his apparent sociocultural and political pet peeve, this is what arguably Ghana’s most infamous albino has to say: “There is no scientific, theological and legal or any psychiatric basis for homosexuality and for that matter Africa and the rest of the World must be courageous enough to speak against it.” The man, to the best of my knowledge, is not a research scientist, geneticist or a scientist of any sort, and so it is not clear upon what basis he made his preceding pontifical assertion. His academic standing in the discipline of legal research and publication is also not firmly established, if at all. What experience and common sense transparently teach us humans, even as I recently told a class of Media Studies students at my college, is the fact that the Natural Law of Opposites inescapably points to the fact that the presence and practice of homosexuality is as natural as the presence and practice of heterosexuality.

I also promptly pointed out that the act of homosexuality, if one critically ponders the matter, may well have been created by Divine Providence or Nature, during the fluxional course of its evolution, to serve as a salutary check on population explosion. This observation appeared to have made a soberly significant impact on my students. I have said before and hereby reiterate the same to Mr. Foh-Amoaning that were he to have been born in Zambia, or one of the East African countries, for example, where albinos are routinely stoned to death or meted instant justice on sight, he would not have lived as long as he has, presently, to be able to launch his rabidly anti-gay crusade. He would have since long fallen victim to the deadly attacks of the anti-albino crusaders and jihadists; call them the Sauline or pre-Pauline crusaders.

I also don’t know what Mr. Foh-Amoaning means, when he asserts that under the United Nations’ Declaration on Human Rights, no provision is made for the protection of homosexuals. Well, I haven’t done the research yet, but it is virtually certain that there are no provisions made for virulently homophobic albinos like Mr. Foh-Amoaning either.

His patently lunatic tirade also raises the question of whether albinos like Mr. Foh-Amoaning are to be first and foremost defined by their phenotypical albinism or their unquestionable humanity. If he answers the foregoing question in the affirmative, then it also clearly stands to reason that LGBT people are equally entitled to be defined first and foremost by their humanity more than everything else.

The question of sexuality, on the other hand, is both a pure question of genetics and cultural praxis, we are told by the experts. And on the latter score, sex-obsessed crusaders like Mr. Foh-Amoaning ought to be able to agree to disagree with those of us who envisage the question of human sexuality as being far more expansive and complicated than this rabidly anti-gay crusader would have the rest of the world believe. Indeed, it was not very long ago that one’s Africanity, or phenotypical blackness, was immutably deemed to be a natural stamp of one’s inferiority. I hope Mr. Foh-Amoaning and his fellow crusaders soberly recognize this fact.