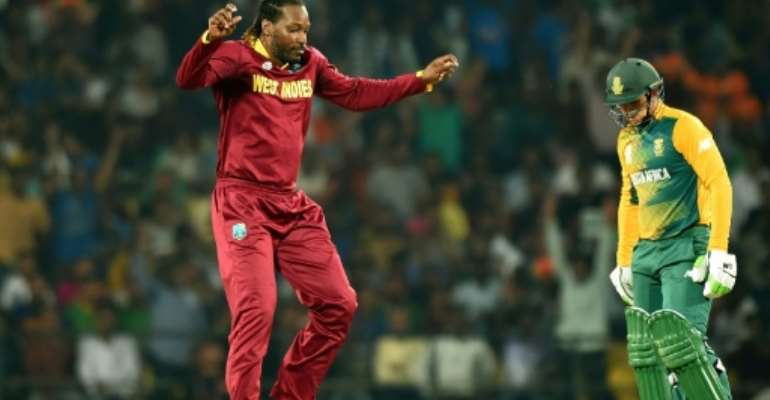 Nagpur (India) (AFP) - Chris Gayle grabbed two wickets as the West Indies restricted South Africa to 122 for 8 in their crunch World Twenty20 match at the Vidarbha Cricket Association Stadium in Nagpur on Friday.

Left-hander Quinton de Kock top-scored for the Proteas with 47 while David Wiese, batting at number seven, notched 28 after South Africa's top-order fell like a pack of cards.

The South Africans, who can ill afford to lose the match, got off to the worst possible start when opener Hashim Amla was run out for one on just the third ball of the innings.

It quickly got worse for the Proteas when Gayle, who has barely turned his arm over in recent years, grabbed the wicket of Rilee Rossouw.

The left-handed batsman sliced a top-edge straight to Russell, who had all the time in the world to comfortably take the catch, walking for nought off two balls.

Rossouw's dismissal, which the dreadlocked Gayle celebrated with a little jig, left South Africa reeling on 20 for three after three overs.

South Africa needed AB de Villiers to put a big score on the board but the classy stroke-player could only manage 10 before being cleaned up by Dwayne Bravo.

The medium-pacer emulated Gayle's celebration, which is a dance from Bravo's new single called "Champion".

David Miller then came in but lasted only four balls. Off-spinner Gayle, who's known more for his exploits with the bat rather than the ball, bowled Miller beautifully as South Africa struggled on 47 for five.

At the half-way stage of their innings the Proteas were on 57 for five. De Kock reached 47 in the 16th over before being bowled by Russell.

South Africa reached three figures in the 17th as Wiese did his best to get runs on the board before being caught by captain Darren Sammy off Russell.

Chris Morris made 16 as South Africa set the Windies a target of 123.

A victory for the West Indies would see them qualify for the semi-finals. A defeat for South Africa would make England favourites to join the Windies in the last four from Group One.

We’re passing a law to nib LGBTQI+ activities in the bud — B...
38 minutes ago