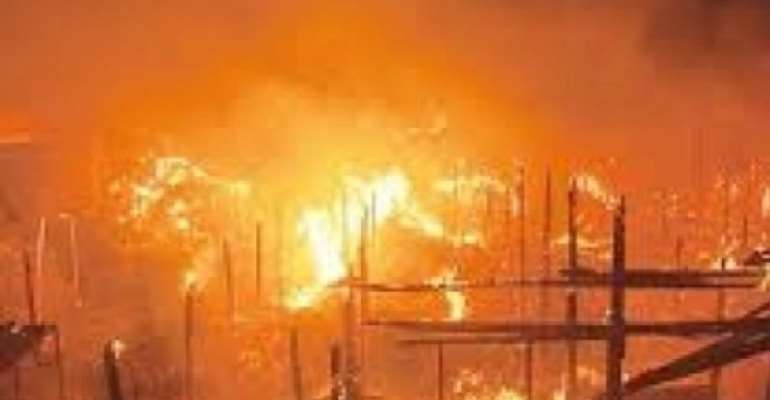 A wild fire has struck a private residence at Kukruzua, a community near Zebilla in the Bawku West District of the Upper East region, leaving a mentally ill mother and her 8-year-old son burnt beyond recognition.

Police say the woman, Ananti Ayabogot, 45, and her son, Kofi Ayabogot, were trapped in the flames after a fire they had built inside an uncompleted mud structure to keep warm found its way to a stockpile of dry stalks.

As the fire continued to spread, an old man in the area raised an alarm, attracting police and firefighters to the scene. The rescue team could not save the victims alive as the fire had burnt them to ashes before the flames were brought under control.

Preliminary police investigations so far reveal that the husband to the deceased woman was in the Ashanti region when the incident happened and that the fire did not destroy any property except the haystacks stored up in the structure where the victims were trapped.

“At 5:30 am, the deceased woke up and swept the compound. Then, she decided to burn the rubbish. She called her five-year-old daughter to bring her matches. After burning the rubbish, she together with the eight-year-old boy decided to warm themselves. You know the weather is so cold here.

“And where she burnt the rubbish is an uncompleted mud house loaded with the straws and the grasses that they use to roof their buildings together with the dry millet stalks which they also use to feed their animals. Nobody knows what happened and the fire got into the firewood and grasses inside that building,” the Bawku West District Police Commander, Assistant Superintendent of Police (ASP) James Ankan, told Starr News.

The police commander also disclosed that the surviving daughter (name withheld) of the deceased woman, who reportedly only went to sleep after giving her mother the matches used in setting the fire, would be invited to the police station on Monday to assist the police in their investigations. The charred bodies are at the morgue of the Bawku West District Hospital at Zebilla where a postmortem was conducted on the bodies on Sunday.

“I have asked the family to bring the girl to me in my office. Preliminary investigations also reveal that the woman [was] mentally retarded. The community members came to attest to the fact that she had a mental problem. As at yesterday when we conveyed the bodies to the mortuary, the family had informed the husband to the woman, the father of the two children, who was in Kumasi when the incident happened,” he added.