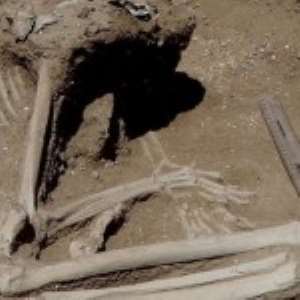 Archaeologists say they have unearthed the earliest evidence of warfare between hunter-gatherers, at a site in northern Kenya.

The 10,000-year-old remains of 27 people found at a remote site west of Lake Turkana show that they met violent deaths.

They were left to die there rather than being buried.

Many experts have argued that conflict only came about as humans became more settled.

These people, by contrast, were apparently nomadic hunter-gatherers.

The archaeologists, who have been working on the site at Nataruk since 2012, discovered that the victims were clubbed or stabbed to death in a single event.

The dead included male and female adults, as well as children.

.
The evidence, published in the journal Nature , does not reveal exactly what happened but the fact that so many people died at the same time suggests it was the result of “some sort of conflict”, according to Cambridge University Professor Robert Foley.

It is believed that the group was attacked by rival hunter-gatherers armed with wooden clubs and arrows or spears tipped with sharpened obsidian, a rare black volcanic rock.

Speculating on the causes of the attack, Marta Mirazon Lahr, who led the Nataruk study, said the “massacre may have resulted from an attempt to seize resources… whose value was similar to those of later food-producing agricultural societies, among whom violent attacks on settlements became part of life”.

Many experts have argued that conflicts only arise “once people have things worth fighting over, [such as] herds of livestock, stores of grain… things that you can both defend and attack,” Professor Foley told the BBC’s Newsday radio programme.

It has been assumed that hunter-gatherers were less likely to engage in such conflicts because they can move away, but the Nataruk find shows that “before we have settled life, groups were competing over resources”, Professor Foley added.