By SUSAN MANSFIELD for scotsman 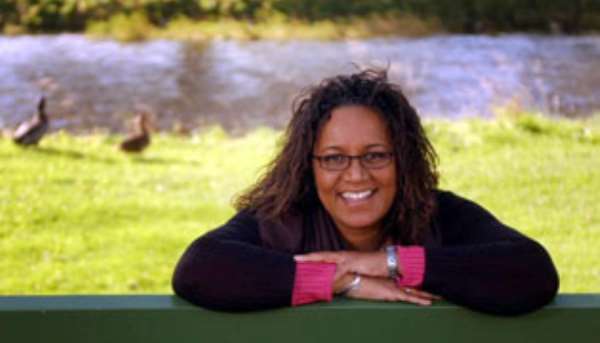 WHEN Lesley Lokko went to South Africa in 1992 to work as an architect, she believed - as most of us did - that apartheid was over. Nelson Mandela had been released from prison two years before and the country's white population had just voted to end their electoral supremacy.

So it came as a shock to Lokko, 38, who is mixed race, to find the country's racial divisions alive and well among the professional classes.

"I got a job over the telephone with a South African architect," she recalls. "I had sent him my drawings and we had talked. When I got there he said, 'You're Lesley? You don't look the way you sound.' I was studying at University College London, he had assumed I was English and white.

"It turned out that the architecture job I had applied for, I couldn't have, though he said, 'I've got a draughting position if you want that.' He kept saying, 'I don't mind, but my clients might,' and I kept thinking, 'Mind what?'"

A fairer world, it seems, isn't built overnight. "I was surprised to find that a lot of architects, who you would imagine would be at the forefront of social change, were actually at the back, propping up the old system. There were 45 registered black architects in a population of 20 million."

Despite this, Lokko, whose her mother is Scots and father Ghanaian, found the mood invigorating. "There was a lot of optimism as well. People looked at me as professional, educated and black, and they saw that as a symbol of how they could be too, which was great."

Returning to Britain in 1994, she felt inspired to write about what she had seen. Laughing at her own naïvety, she describes how she read an article in Time Out on how to write a bestseller, and decided to give novel- writing a try.

"When I first started, I remember ringing up an agent and saying I wanted to write a book about Africa. He just said, 'If you want to sell 300 copies, go ahead. Africa doesn't sell.' I kept thinking, 'Would it be possible to write about Africa in the genre of a blockbuster? Could you write Africa with Shirley Conran in mind?'"

Now, nearly ten years later, the answer would seem to be yes. Lokko's first novel, Sundowners, became the subject of a bidding war and is being promoted heavily by Orion as a "brainy blockbuster". It's a big, glamorous doorstop of a book full of designer labels and luxury houses in the mould of the 1980s bonkbusters by Jackie Collins or Judith Krantz.

Its heroine is spoilt and beautiful South African heiress Rianne de Zoete, who knows nothing of the world beyond the private swimming pools and high-security fences of rich white South Africa. However, her views on racial supremacy take a battering when she is packed off to boarding school in England where she is expected to sit down to dinner with coloured girls. To make matters worse, the head boy at the nearby boy's school is Riitho Modise, son of a (fictional) black South African political leader imprisoned with Mandela.

The novel tracks Rianne and three schoolfriends through the next 15 years, to London, New York, Paris, LA, Cape Town, as they find their way in a rapidly changing world. Rianne becomes a model, Nathalie a businesswoman, Gabby looks after everyone except herself and Charmaine is in trouble with men and drugs. And when Rianne and Riitho meet again, the South Africa they left in the early Eighties is a very different country.

SOME OF THE most interesting new writing published in Britain in the last five years has been by mixed-race women writers, such as Zadie Smith, Monica Ali and this year's winner of the Orange prize, Andrea Levy. Lokko takes this trend into the guts of popular fiction, providing a glamorous counter to the lone-woman-in-a-Clapham-bedsit-with-bottle-of-Chardonnay novels which have recently dominated the women's fiction market. It also has a more international appeal than most chick-lit.

"It has sold well in Ghana, Nigeria and Malaysia," says Lokko. "I think a lot of chick-lit is very specific to London. Jackie Collins is huge in Africa, partly because it's aspirational, but also it's not so culturally specific. Anyone can relate to glamour and sex and shopping."

Born in Dundee and growing up in Ghana and Scotland, Lokko has always lived with questions about race and identity. Her father studied medicine at St Andrews, one of the first Ghanaians sponsored by the newly-independent government to study overseas. "We left Scotland soon after I was born but returned when I was six for three years," she says. "We went to the local school and obviously we were the only black family in town, so a lot of people knew us when we didn't know them.

"When I was growing up, Ghana was going through quite an interesting period, because a lot of men had come to Europe to study, and come home with foreign wives, so there was a whole community of mixed-race children. The themes of race, culture and identity were just part of everybody's lives. I wanted to write about that, but in a way that's accessible and fun to read about, not weighted down with the problems associated with it."

When she started to write, she thought back to the big, glitzy novels she had enjoyed reading while growing up. "The economy in Ghana collapsed in the 1970s and 1980s. There wasn't a huge amount of entertainment or diversion so we just used to read huge amounts. Because there weren't any bookstores, you would read whatever somebody who was coming back from Britain or the States would bring. I read everything from Mills & Boon to Jackie Collins and Shirley Conran."

Like Rianne, Lokko was sent to an English boarding school at the age of 16. "Really, it was more of a finishing school. There was a lot of emphasis on skills," she chuckles. "Home economics. How to get a man. But it was an interesting time to be at boarding school. There was a lot of Nigerian oil wealth around and my school took in a whole bunch of Nigerian girls. There were quite a lot of culture clashes. I did a lot of mediating between conflicting groups."

She won a place at Oxford to study Hebrew and Arabic but dropped out after a term, following her boyfriend to the US, where she lived for four years in Los Angeles, gathering, though she did not know it, material for her books. "I think I met the widest range of people, all sorts, from drug-dealers to academics. LA is just a mad, mad place." She returned to London in the late Eighties to study architecture, but by the time she was seeking a placement for her fourth year, the country was deep in recession, leading her to seek opportunities in South Africa. She went on to become a lecturer in architecture - she is now visiting professor at the University of Westminster - and is passionate about how the discipline can better understand issues of race and identity.

"I'VE TRIED TO ARGUE that architecture is not just a technical discipline, it's also a cultural discipline, and issues of history, identity and migration are very much part of the culture," she says. "Different cultures look at space, surface, line, beauty, and have different ways of understanding them. I'm interested in trying to make a space where students can explore these things. Architecture in Britain bangs on endlessly about attracting different sorts of students, but my experience of teaching African and black students is that they feel alienated from it because the discipline is incredibly Western."

Most of her time is now spent in Ghana, where she is building a house - "I can't tell you how stressful that is," she laughs - though she resolves to spend two months every year in Scotland writing. "It's very difficult to work in Ghana, it's too social. I wanted to go somewhere where I feel comfortable. People said, 'Why don't you go to the south of France?' but I really like Scotland. I still have certain memories of things like the light, the smell, the sound." Last year, she spent the autumn in the Pentlands writing her second novel, Saffron Skies, which will be published in March. When I met her, she was in a cottage in the Borders, working on her third book.

"The only trouble is, when I start a new book, I order truckloads of reference books. Then when I finish, I've got a 23-kilo weight allowance to go back to Accra. I'm always begging for an upgrade so I can take my books!"