Ghanaian Muslims Mourn The Death Of 107 Pilgrims In Mecca 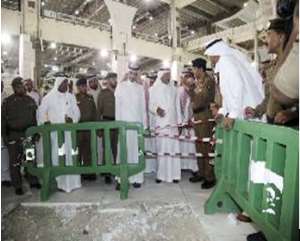 On learning about the death of pilgrims in the holy city of Mecca, every one especially Muslims became startled. They were worried not because of the incident that claimed the lives of the pilgrims. After all during the annual pilgrimage every year some pilgrims are expected to lose their lives and that is considered to be blessings onto the dead.

But people all over the world were saddened by the scale of death during this year’s hajj and the manner the deaths occurred. According to reliable information from Saudi Arabia, 107 of the pilgrims lost their lives while 238 others got injured.

According to The Saudi Press Agency the incident occurred at the HARRAM when a crane was brought down by strong wind and heavy rain crashing though the huge building.

Pictures circulated on social media showed pilgrims in bloodied robes and debris from a part of the crane that appeared to have crashed through a ceiling.

Other pictures showed queues of Saudi men volunteers donating blood for the injured.

"All those who were wounded and the dead have been taken to hospital. There are no casualties left at the location," General Suleiman al-Amr, director-general of the Civil Defense Authority, told Al Ikhbariya television.

We know that the Hajj is organized annually for millions of people around the world; therefore it is right for the Saudi authorities to expand facilities to meet the demands of the more than 1.6 million people expected in the holy cities. however Since the holy cities get full to capacity annually many people were wondering why the Saudi authorities embarked on the construction work in the holy sites at a time when weather forecasters had warned of severe rainstorms..

The Federation of Muslim Councils of Ghana the umbrella organization for Muslims on learning about the incident had no choice but to express sadness over the loss of lives and injury to scores of pilgrims due to the collapse of the crane at the Grand Mosque in Makkah.

The FMC therefore expressed its condolence to the Custodian of the two Holy Mosques , His Majesty King Salman bin Abdulaziz Al-Saud, the Ambassador of the Royal Kingdom of Saudi Arabia in Ghana , the families of the deceased and Muslims over the world for the passing away of those illustrious servants of Allah and also prayed for speedy recovery for the inured .

Other Muslim individuals and organizations were worried about what happened and prayed that nothing untoward would happen from now till the hajj pilgrimage comes to an end. The Saudi authorities had decided to investigate the incident which is in order. However because thousands of people across the world are currently flying out daily to Saudi Arabia many are those who wish the Saudi authorities would halt all construction works in the Haram (Holy Precincts) and prepare a program to ensure preventive measures and public safety in the holy land especially during pilgrimage periods in future.