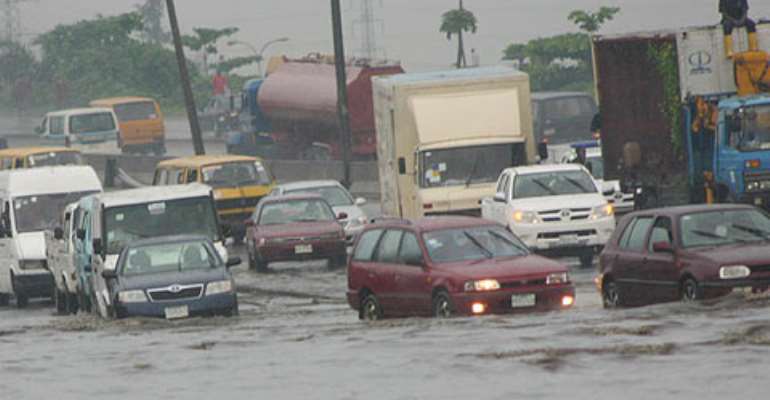 I cannot candidly say that I feel sad or sorry for the all-too-predictable flooding of Accra that has reportedly drowned some two-hundred residents of Ghana's capital. This is an annual occurrence that has been regularly ravaging the country's largest city since before yours truly was born; and I am more than fifty years old. And during those 50-plus years of postcolonial existence, the Rawlings-led Provisional National Democratic Congress (P/NDC) has occupied the seat of governance for three decades and counting. And so the most logical question to ask here is this: What comprehensive urban-planning strategy have Chairman Rawlings and his minions put in place to significantly meliorate this increasingly worsening problem?

I am, of course, well aware of the fact that between 2009 and 2012 when he held the reins of governance, the now-late President John Evans Atta-Mills initiated a program of demolishing private homes and other architectural landmarks that had been illegally erected in the pathways of dormant waterways and flood plains, and which had long been determined by city planners and engineers to be a hazard to residents of the Accra Metropolitan Area, especially in the event of inclement weather such as is reported to be ravaging the country's seat of governance. I don't quite recall the outcome of the Mills-initiated demolition program or exercise, except the fact that it had been mired in partisan politics, with some of those whose real-estate properties had been marked up for demolition virulently accusing the Mills government of going after them primarily because they were widely known to be staunch supporters of the country's main oppostion New Patriotic Party.

While the caption of this column is focused on the longest-ruling Ghanaian leader and dictator, Chairman Jerry John Rawlings, the blame for this largely preventable disaster, and tragedy, must be proportionately shared among all the leaders of postcolonial Ghana, including the country's first president, Mr. Kwame Nkrumah. Indeed, during the 8 years that President John Agyekum-Kufuor ran the country, some laudable efforts were made towards meliorating the current situation, in particular regarding the erection of coastal sea walls or levees. But here again, not much that was constructive and far-reaching appears to have been done about the indiscriminate erection of homesteads in violation of building codes. I am also quite certain that the Department of Urban Planning and Management, or whatever it may be called in Ghana these days, has rules and specifications regarding the construction of residential structures.

I am also fully aware of the fact that the scandalous inability of city housing inspectors to strictly enforce these rules, regulations and ordinances has much to do with bribery and corruption. Legend also has it that during the early 1970s, perhaps under the Ignatius Kutu Acheampong-led junta of the so-called National Redemption Council (NRC), later Supreme Military Council (SMC-I), some Israeli civil engineers were in the process of urbanizing the Greater-Accra Regional Sewage System, but were summarily discharged and their contract abrogated. We are informed that here, too, it was politics that had intervened and interrupted the country's infrastructural development.

This time, though, the sort of politics that militated against Ghana's modernization had to do with some article under the Charter of the erstwhile Organization of African Unity (presently renamed the African Union), that had caused the government of the day to abandon the project. Isreal had attacked and routed the Egyptian military under the junta of Gen. Abdel Gamal Nasser. The reasoning went that since the United Arab Republic of Egypt was a bona fide member of the OAU and a major player to boot, Ghana had an obligation to empathize with the "United Arabs."

Whatever be the case, the present situation demands self-interested and foresighted leadership of a kind that is yet to be witnessed in the country. I don't see this caliber of a leader in our incumbent president, Mr. John Dramani Mahama. But I am also quite certain that the quality and caliber of leadership the country is in dire need of exists right among the very population of the country. What incenses me, though, is to hear the blindly self-righteous Chairman Rawlings emotively request the use of a bulldozer, well after the fact, in order to raze down all Accra residential and other architectural structures envisaged to be in violation of city building codes (See "Accra Floods: I Wish I Had A Bulldozer - Rawlings" MyJoyOnline.com /Ghanaweb.com 6/4/15).