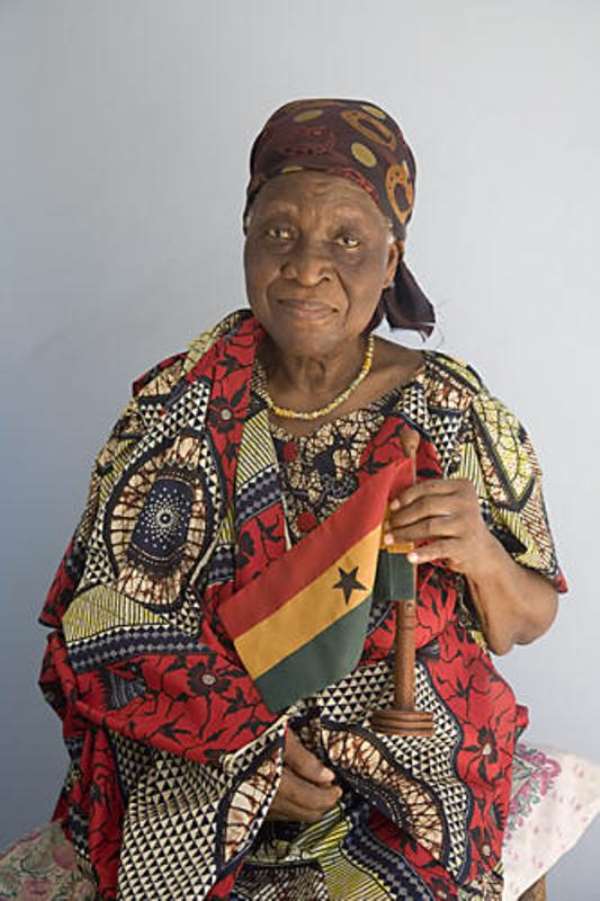 The mortal remains of Theodosia Okoh, the designer of Ghana's national flag have been interred at the Osu Cemetery in Accra after a state funeral Thursday.

The funeral for one of the country's illustrious daughters was held at the forecourt of the State House in Accra.

Hundreds of Ghanaians, including government officials, members of the diplomatic corps, the clergy, members of parliament and high-ranking politicians, defied Thursday morning's downpour to pay their last respects to the late stateswoman who died on April 19, 2015 at the age of 92.

Communications Minister, Omane Boamah speaking at the event, called on Ghanaians to take a cue from the life of Theodosia Okoh and commit themselves to the national cause.

He recognised that, 'the most remarkable feature of this flag is not just the colours and how they are beautifully combined for effect but the story that those colours tell about us as a people. Through sheer hard work and dedication, she tells our unique story to all nations around the world. Through this flag, we get instant recognition anywhere on the globe.'

'When we call ourselves Ghanaians what separates us from the rest of the people of the earth, among others, is this one flag created by this extraordinary woman,' Dr Boamah added.

Following condemnation from the general public and a personal cry from Theodosia Okoh, the president directed the AMA boss to reverse the decision.

Recounting that unfortunate mishap, the Communications Minister said 'In the twilight of her years, she demonstrated a streak of genius when speaking out against an unfortunate mix-up that would have resulted in a great injustice. She defended her place in history by kicking against efforts to rename the National Hockey Pitch which had been named after her in recognition of her contribution to the sport of hockey.'

He urged that 'As we part ways with our mother and grandmother on this solemn occasion, let the lessons of her unyielding desire to work for her nation on many fronts guide us now as we recommit ourselves to the national cause.'

Madam Okoh is also celebrated for her immense contribution to the development of sports in the country. Mrs Okoh was a national hockey star and the first and only female chair of the Ghana Hockey Association.

Until her death, she was a patron of the Sports Writers Association of Ghana (SWAG).

A thanksgiving service will be held at the Ridge Church on Sunday May 31, after which the family will gather at her residence for the final funeral rites.