By Jose Lopez
Listen to article

This history will allow you to understand why the United States (US) government has ignored 33 United Nations ‘resolutions to immediately decolonize Puerto Rico. Decolonization does not mean to hold a plebiscite to find out what Puerto Ricans want. That has already been decided by the international community in 1960. The verdict is that colonialism is a crime against humanity, because it represents a threat to world peace. The UN’s solution, therefore, is to immediately give Puerto Rico her sovereignty so that she could direct her own destiny.

This means, among other things, that the United States government does not believe in world peace, because it has held Puerto Rico under colonialism for 116 years. Furthermore, it refuses to release from prison Puerto Rican political prisoner Oscar Lopez Rivera despite world-wide support for it. Oscar has already been incarcerated 7 more years than the 27 years that Nelson Mandela served! What does that say about the US governments' belief in democratic principles, freedom, and human rights?

Join us in our 2nd Oscar - Mandela March in NYC on Monday, June 22, 2015. On that day, the United Nations will once again discuss the decolonization of Puerto Rico. We must continue to peacefully protest, because there could be no peace without freedom. And because, those who maintain colonies, don't believe in justice for all! For more information: www.TodosUnidosDescolonizarPR.blogspot.com.

What value does Puerto Rico have to other countries?

Click below link to read about this topic.
http://en.wikipedia.org/wiki/Military_history_of_Puerto_Rico 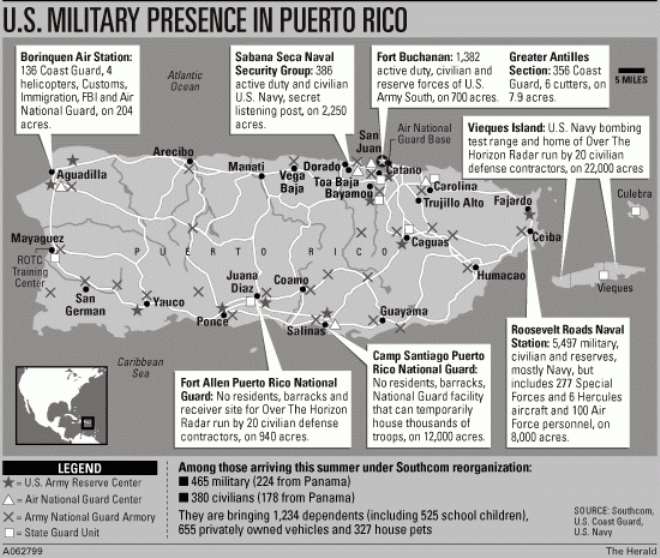