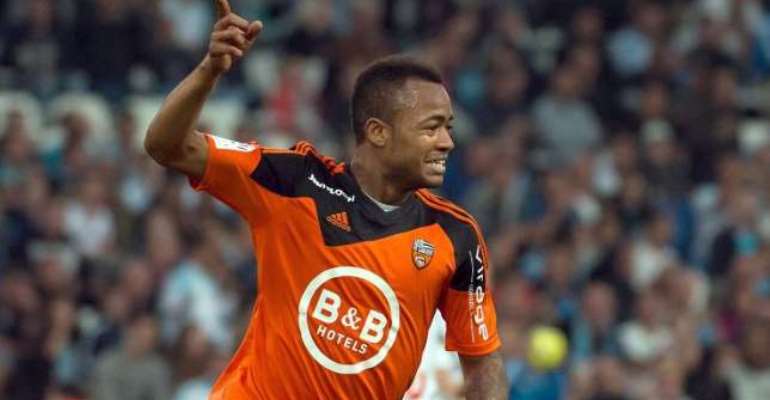 Andre Ayew and his brother Jordan played on opposite sides in the French Ligue 1 on Friday night when Olympique Marseille entertained FC Lorient.

Jordan Ayew produced what he claims is the best game he has had in France against Adre's side Marseille scoring twice and giving an assist.

Andre Ayew also scored in the game which home side Olympique Marseille lost by five goals to three.

Jeffrey Schlupp was not named in the squad for Leicester City in their game against Burnley away from home in the English Premier League on Saturday.

The Ghanaian's side continued their last minute surge to beat relegation with another victory, beating home side Burnley by a lone goal to nil.

Albert Adomah's hope for a straight qualification to the English Premier League was dented by Fulham as they edged Middlesbrough by a goal in the 4-3 thriller on Saturday.

Adomah played in the entire duration of the game.
Ghanaian forward Kwesi Appiah missed his Reading side's 2-0 home defeat against Brentford in the English Championship on Saturday.

Emmanuel Agyemang-Badu found the back of the net for Udinese in their home game against AC Milan on Saturday.

Udinese won the game by two goals to one. Sulley Muntari and Michael Essien did not play a part for AC Milan.

Abdul Baba Rahman played the entire game for Augsburg on Saturday as they lost away from home to Hamburger SV in the German Bundesliga.

Jonathan Mensah has still not recovered from an injury lay-off and did not play a part for his Evian Thonon Gaillard side in their 2-1 home defeat against Bastia on Saturday.

Frank Acheampong played in the entire duration of the Europe qualification play-off game for his Anderlecht side against Kortrijk.

The Ghanaian and his Anderlecht side won by five goals to one on home soil.

Richmond Boakye Yiadom was not named in the Atalanta squad as they drew 2-2 at home to Empoli in the Italian Serie A on Sunday.

Alfred Duncan made a substitute appearance for Sampdoria on Sunday against Napoli in the Italian Serie A.

Napoli defeated Sampdoria by four goals to two. Afriyie Acquah was named on the bench but could not come on to play a part in the loss.

In the Spanish La Liga, Derek Boateng played the full game for Eibar in their 2-0 away defeat to Almeria on Sunday.

David Accam scored the only goal in the MLS game between Chichago Fire and New York FC on Saturday, giving his Chichago Fire side a home victory. Follow @kboakye92