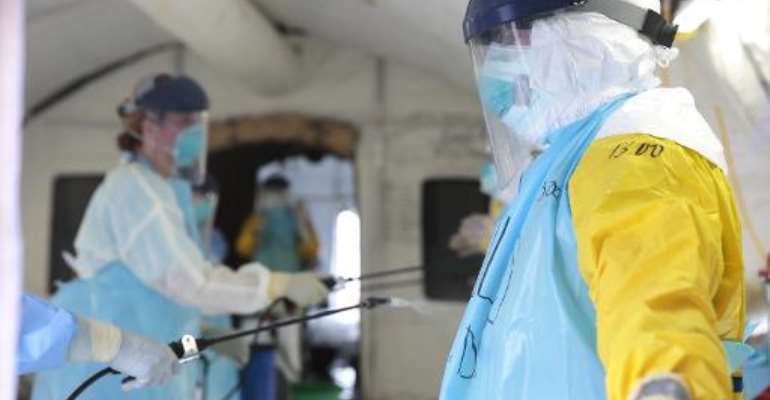 Medical workers spray their protective gear at an Ebola treatment centre in Monrovia on December 19, 2014. By Evan Schneider (UN/AFP/File)

"This disaster might have been avoided if African governments had made free public health care and spent more on their health systems, under the commitment they made 14 years ago in the Abuja Declaration," Oxfam said in a statement.

"It's clear that Africa's existing architecture for early disease detection, response and control is wholly inadequate," the aid agency added.

AU Commissioner for Social Affairs Mustapha Sidiki Kaloko on Wednesday said an African Centre for Disease Control and Prevention would be set up by mid-2015.

"It is a reality, it is going to happen," Kaloko said, with the first phase concentrating on setting up "an early warning system" for the detection of epidemics. "We should be ready the next time. We shouldn't be caught unprepared."

However, its exact location remains undecided.

"We will start with a coordination centre within the AU and then set up up to eight regional centres," Kaloko added.

The AU Ebola Solidarity fund will be launched on Friday during a summit meeting for leaders of the 54-member bloc, which has already sent hundreds of health workers as part of its mission to tackle the outbreak in west Africa.

In November, the AU, African Development Bank and regional business leaders set up a crisis fund to help areas hit by the Ebola outbreak, with some $28 million pledged.

"It is time for Africa to mobilise its own resources in support of its development and take charge of its own destiny," AU chief Nkosazana Dlamini-Zuma said Wednesday.

The worst outbreak of the virus in history has seen nearly 9,000 deaths in a year -- almost all in the three west African countries of Liberia, Guinea and Sierra Leone -- and sparked a major health scare worldwide.