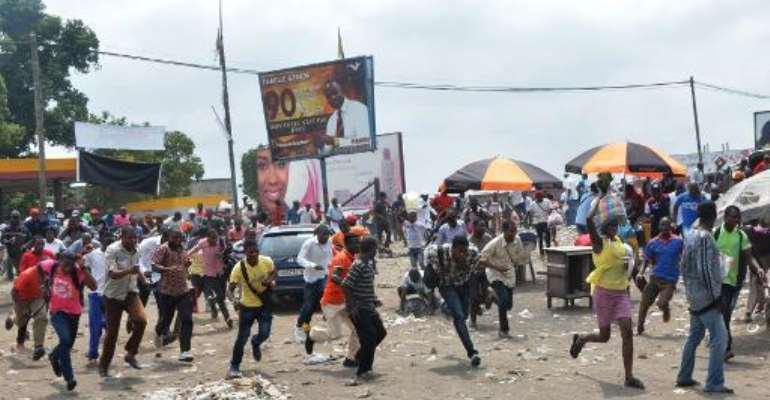 Protesters run after soldiers opened fire to disperse a crowd on January 20, 2015 in Kinshasa, Democratic Republic of Congo. By Papy Mulongo (AFP/File)

Kinshasa (AFP) - Clashes between Democratic Republic of Congo police and political protestors that left some 40 people dead last week also revealed the level of hostility towards the Chinese in the capital Kinshasa.

"Congolese, please" implored a sign in one store window, hoping it would be spared by the marauding protesters who attacked and looted around 50 Chinese-owned stores in the gritty, teaming Kinshasa neighbourhoods of Ngaba and Kalamu.

Other stores displayed the message "Ya bino moko" -- "it belongs to you, too" in the local Lingala language -- in a bid to discourage the rioting demonstrators who shattered windows, broke down doors and picked shelves clean in nearby shops owned by Chinese nationals.

"We've got a printing shop and spare parts store here, (but) nothing was touched besides the Chinese store," said a 37-year-old businessman who owns dozens of business premises in the area.

According to rights groups, around 40 people have died over the past week in protests ostensibly against a proposed bill that could extend President Joseph Kabila's hold on power in the vast African nation.

Human Rights Watch said in a statement Saturday that security forces used excessive force during the protests and then tried to remove the evidence.

The advocacy group said it had confirmed 36 dead in protests in the capital Kinshasa, 21 of whom were fatally shot by security forces, and four dead in the eastern city of Goma.

The government has put the death toll at 12.

The political demonstrations, confrontations with police and subsequent rioting targeting Chinese entrepreneurs may be rooted in the same popular disenchantment with President Kabila and the power base he rules from.

Though the protests primarily opposed a change to electoral law that would allow Kabila to remain in office beyond 2016 -- sidestepping a constitutional prohibition of running for office again -- the rioters' targets appeared to have been influenced by the government's decision to boost economic ties with China.

Gigantic contracts between Kinshasa and Beijing signed in 2007 and 2008 gave Chinese companies the right to operate many of mineral-rich DR Congo mines in exchange for developing the country's road system and other infrastructure -- deals Western nations denounced as unfair.

As a result, some observers say, when the protests opposing Kabila's effort to retain power in the impoverished country turned to rioting, the focus fell on Chinese businesses.

Thousands of Chinese workers have come to DR Congo to provide labour for the projects covered by those contracts, many in Katanga in the country's south-eastern mining centre.

China's embassy says between 4,000 and 5,000 Chinese nationals now live in DR Congo, though the actual number is believed to be far higher.

Many of those Chinese citizens work in and around Kinshasa on infrastructure construction projects, running businesses serving their compatriots and living together in packed housing in the capital's poorer neighbourhoods.

- 'The Congolese are jealous' -

Some Kinshasa residents resent what they see as the Chinese preference for sticking together in segregated communities, retaining the customs, habits, and language in their native land.

Local business owners also begrudge the shops opened by Chinese nationals to serve the needs of their compatriots, whose low prices also draw in Kinshasans as well.

Today, signs written both in letters and Chinese characters are a common sight, hanging from storefronts and other businesses in Kinshasa's working-class neighbourhoods.

But such signs also made the outlets easily identifiable targets when the political demonstrations transformed into rioting in the capital.

"They sell everything, (and) we're no longer doing any business because of them," complained one Kinshasa telephone card vendor, who said he hoped the spate of looting would serve as a "lesson" to his Chinese rivals.

"The Chinese slash prices," echoed a 24-year-old resident who called the competition from Chinese businesses "too much".

But not everyone agrees. "The Congolese are simply jealous," said a woman selling bread from beneath an umbrella, shaking her head in dismay. "It's a pity."

A Chinese diplomat, who requested anonymity, told AFP the apparent targeting of Chinese businesses by rioters were isolated instances as part of wider unrest, and of no long-term significance.

Because of that, the diplomat said, no specific security instructions to nationals had been issued by the embassy, which insists there is no "plot against Chinese" citizens in DR Congo.