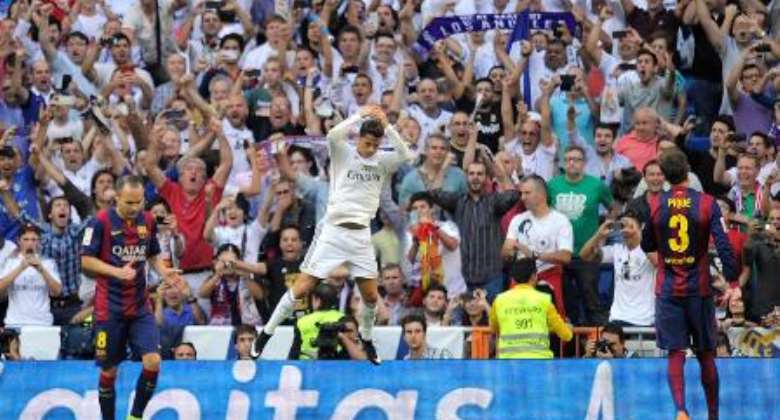 Real Madrid came from a goal behind to beat Barcelona 3-1 on Saturday at the Santiago Bernabeu to end the Catalan's unbeaten run in the 2014/15 Spanish La Liga season.

With Luis Suarez starting his first official match for Barcelona since his four months ban for sunken his teeth's into Giorgio Chiellini's shoulders at the world cup one would expect the former Liverpool striker to do his tricks in front of goal but it was the man on renaissance Ronaldo who made the difference.

It took only four minutes for the visitors to break the deadlock when Luis Suarez picked Neymar across the face of the eighteen for the Brazilian wonder kid to expertly slot in one to silence the 75,000 crowd at the Bernabeu.

Real Madrid responded in the 34th minute through Cristiano Ronaldo from the spot (his 16th goal of the season)after centre back Gerard Pique carelessly handled Marcelo's cross into the eighteen.

Back from the recess, Real initiated a barrage of attacks and rightly paid off in the 51st minute when Pepe nodded in Toni Kroos' corner into the heart of the box.

Barcelona almost immediately responded with left fullback Mathieu's rasping drive but captain Iker Casillas in post for the European Champions tipped the ball over the bar.

Real shut the door on Barcelona's face in the 71st minute from a quick counter attack when substitute Rakitic's corner was intercepted by Cristiano Ronaldo. The world best player played Isco through as Iniesta committed a costly error on the touchline.

With the win Real Madrid has reduce the points deficit between them and Barcelona to one and also got the key as the first team to stop the Catalan's winning streak in 776 minutes.