Ebola still of 'great concern' in west Africa epicentre: WHO 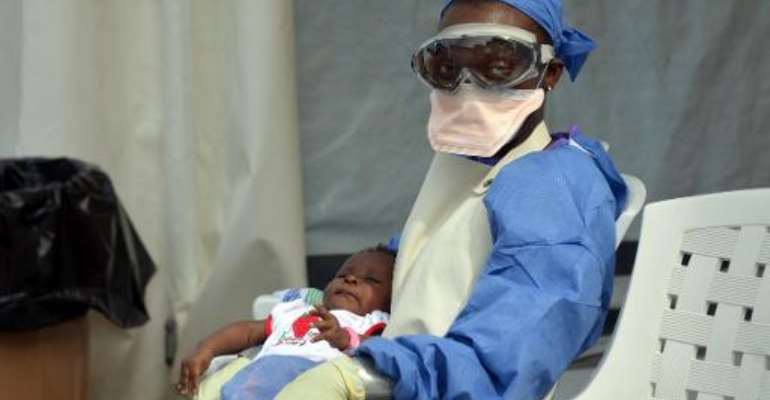 A Liberian health worker holds a baby infected with the Ebola virus at the NGO Medecins Sans Frontieres (Doctors Without Borders) Ebola treatment center in Monrovia on October 18, 2014. By Zoom Dosso (AFP/File)

Geneva (AFP) - Top experts on the Ebola virus raised grave concerns Thursday about the worsening epidemic in west Africa as the number of people with the disease neared 10,000.

The World Heath Organization said after an emergency meeting on the deadly haemorrhagic fever that the situation in the worst-hit countries of Guinea, Liberia and Sierra Leone "remains of great concern".

"It was the unanimous view of the committee that the event continues to constitute a public health emergency of international concern," it added.

The experts have been brainstorming new ways to halt the spread of the epidemic, the third such meeting since the outbreak of Ebola in Guinea earlier this year.

"The primary emphasis must continue to be stopping the transmission of Ebola within the three affected countries with intense transmission. This action is the most important step for preventing international spread," the WHO said.

The hunt is on for a vaccine as the WHO's new official death toll reached 4,877, with 9,936 people infected in the world's worse-ever Ebola epidemic.

At a meeting Thursday, the European Union put up 24.4 million euros to find vaccines and treatments.

The funds will be fast-tracked "in order to start work as soon as possible," the European Commission said.

"We're in a race against time on Ebola and we must address both the emergency situation and at the same time have a long term response," Commission head Jose Manuel Barroso said.

WHO spokeswoman Fadela Chaib said earlier this week that "much has changed" since the experts last meet in September, with cases in Spain and the United States.

Since then, the infection rate in the worst-hit countries has nearly tripled, with some experts warning the rate of infections could reach 10,000 a week by early December.

The first doses of the experimental rVSV vaccine against Ebola arrived at the Geneva University Hospital from Canada as the meeting was going on, with the WHO saying its goal was to ship initial supplies to Africa by early 2015.

But on the ground, the situation remained deeply worrying, with Liberian President Ellen Johnson Sirleaf admitting "the transmission just ran ahead of us" as she introduced new border controls to slow the spread.

Liberians carried the disease to Nigeria in July and the US in September. New checks at the country's international airport will match passengers' names against lists of relatives of Ebola patients.

But as the measures came into force, WHO warned that the extent of the disease in the impoverished country -- already the worst-hit -- had been underestimated, with under-reporting of infections, especially in the capital Monrovia.

In neighbouring Sierra Leone, two people died in a riot which erupted Tuesday when health workers tried to take a blood sample from a 90-year-old woman suspected of having Ebola.

A machete-wielding mob clashed with security personnel in the eastern town of Koidu and then went on a rampage, doctors told AFP. Several buildings were attacked and gangs of youths roamed the streets shouting "No more Ebola!"

But in rare good news, a member of the Doctors Without Borders team working in the northern Liberian town of Foya told the visiting president Sirleaf the town could soon be declared Ebola free, after no new cases had been reported in three weeks.

And in the United States, a Texas nurse infected with Ebola after caring for a Liberian man who died from the disease no longer has the virus, her family said.

The WHO is to coordinate trials of the Canadian vaccine in Geneva alongside those already under way in Germany, Gabon and Kenya.

The vaccine, developed at the National Microbiology Laboratory in Winnipeg, is one of two experimental Ebola vaccines identified by the WHO as having shown promising results when tested on monkeys.

Meanwhile, the latest contingent of 83 Cuban nurses and doctors headed to Liberia and Guinea on Wednesday bringing the total number of Cuban health workers in west Africa to at least 248.

In North Korea, the isolated state announced it would close its borders to foreign tourists on Friday over Ebola fears, according to travel agencies.

State news agency KCNA did not confirm the ban, but said "thorough preventive measures" were being taken in Pyongyang and elsewhere to combat the disease.