Occupy Front Lawns of Flagstaff House on 1st July 2014 @6am 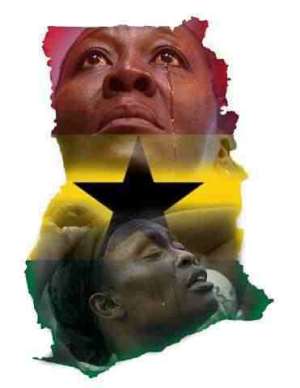 "To sit down and keep quiet and still think that narcissistic politicians will ever do you "any sustainable good" is akin to the man who tries to pull himself out of a swamp by his own hair" - Yours truly.

Kwesi Nyantakyi, the GFA President, symptomatic of Ghanaian leaders has already started the blame game - shifting the product of his irresponsibility onto the players that they were interested in money than fighting for Ghana. Coming from him, this is very rich. When these same players started their outrageous demands and were insisting that we pay them in dollars at a time Ghana was in serious economic crisis and the possibility of finding a stream on Sahara Desert was higher than finding dollars in Ghana, this same Kwesi Nyantakyi was the learned lawyer who boldly shut all of us up that we should 'BE REALISTIC AND UNDERSTAND THEIR [THE PLAYERS] DEMAND'.

Today, this same man has turned 360 degrees to cite the very thing we complained of namely: 'the players' outrageous insistence on money before they play' which he rebuffed as the cause of our woes. But what was he thinking of? Greedily supporting and inciting the players against us so that he can as Muntari brilliantly puts it 'make money on [their] back' and be chopping gargantuan qualification bonuses and allowances as they move to the next stage of the tournament? Sorry Sir!! Every tournament cannot successfully become a means for making money!

Let me leave the football matters, I believe that Country Man Songo will take it up on Fire for Fire, after all the root of the problem is the desire of government to invest in that sector of our economy called 'NONSENSE' by using the purported passion of the nation as the unruly horse.

Outrageously, Government was able to speedily mobilize 3.5 million dollars in less than twenty four hours, bundle the cash in bags, chatter a flight from Ghana to Brazil, hire 72 Military Police, 19 Municipal Guards, 26 Squadron Ground Force Military, 14 members of the Grupamento de Operacoes Especiais de Brasilia, One Aeronautical Policia (Air Force), 2 Highway Patrol Battalion and an Air Mobile Brasilia Group to send the $3.5 million through the streets of Brasilia to the players. Woow!!! Look at how brilliant and responsive the Managers of Ghana are!!!!!

But I thought Mahama said the country was broke! I thought Polytechnic lecturers had been on strike for the past fourteen weeks. I thought Kumasi - Accra Road was yet to be completed. Has Mahama not scrapped teacher training students' allowances? Has government not determinedly threatened that of nursing students' too all because we have no money to sustain them?

Today, by the kind courtesy of the brilliant investment decisions of government, ECG has designed a nice timetable for Dums) Dums) which it does not even follow. We have now turned everything into taxes and have astronomically increased existing ones to cause and increase hardship. Prices of all utilities have also been increased. Government is cutting back expenditure on all social goods because the country is broke. There is no petrol in the country. My mates who were employed by government after National Service have not been paid their salaries since 2012 and government says it will pay them only three months arears.

Government always has no money when it comes to NHIS, paying workers, sustaining lifesaving and enhancing projects, yet it is always able to find unimaginably colossal sums of money for silly stuffs.

As if the huge monies already spent on flying and paying ambassadors to Brazil was not unwise enough, once again, President Mahama has abandoned all the pressing problems at hand and has announced to waste our taxes to set up a committee to investigate why we exited from the world cup! I agree with those who say Mahama rather need to set up a committee to investigate why he is never able to find solutions to our problems. Clearly, Mahama does not see that there are real problems in Ghana which ought to be urgently addressed. If care is not taken, Government will invest all our resources in only two sectors of our economy: The 'NONSENSE and CORRUPTION SECTORS'.

It is for these and other reasons why I think the invitation from CONCERNED GHANAIANS FOR RESPONSIBLE GOVERNANCE (CGRG) to 'Occupy Front Lawns of the Flagstaff House' on July 1st 2014 at 6am ought to be positively and massively honoured. Any Ghanaian who cares for her future, that of the next generation and Ghana at large should have a need to be part of this peaceful movement meant to let Mahama know that He was not elected President to just TALK, make Christmas tree of directives, orders and invest taxes in 'NONSENSE' AND CORRUPTION. He has to sit down and use his brains to think out solutions and benignly invest state resources as being done in Malaysia, South Korea, China, Brazil and other emerging economies. Ghana has now become the laughing stock for the international media and we are being ridiculed as if we are all stupid and Mahama must be told this!

I think Ghana can be made to work for the Ghanaian just as China, Korea, Malaysia are working for the Chinese, Korean and Malaysian.

Give Me Chance To Correct My Errors — Disqualified Kofi Kora...
37 minutes ago

Gov’t Will Establish Committee On Compulsory Acquisition Of ...
57 minutes ago