The Sudden Death of P. V. Obeng: The Lessons for the Ghanaian Politicians 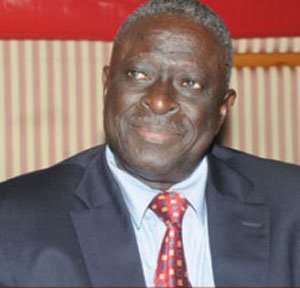 King David once asked in Psalm 89:48, 'Who can live and not see death, or who can escape the power of the grave?' In other words, as humans death is inevitable to us. However, the manner and the time that the death comes to a person make a lot of difference, especially to the grieving family.

Death is unpredictable and can take both the young, the old, the strong and the sick at any time and at will, but sometimes our own actions or inactions can contribute to our untimely death. For instance, some take too dangerous risks that can cause their untimely death. However, in many developing countries such as Ghana, many citizens die early because the state fails to provide the basic necessities such as good health care and appropriate living conditions.

Notwithstanding the above, it is becoming increasingly evident that as far as Ghana is concerned, it is not only the poor that suffer from the effects of poor political and economic management, as many politicians appear to be also dying prematurely.

As I am writing many Ghanaians are still discussing the sudden death of Mr P. V. Obeng, particularly, how he died in a very horrible circumstance because he suffered an asthma attack and it took a good Samaritan taxi driver to take him to the hospital, but he had already passed on by the time the good Samaritan was able to get him to the hospital. The question though is, would he have survived if he had been transported in a well-equipped ambulance? No one knows, however, the availability of an ambulance would have greatly improved the chances of his survival. Former President Rawlings commenting on P.V. Obeng's death stated that P. V. Obeng had chronic problem with asthma. Why did P. V. Obeng with all the influence he had in the PNDC and NDC governments could not influence the government he was so powerful in to establish good ambulance services, which could have saved his life when he needed them most? Perhaps, P.V. Obeng like many other Ghanaian politicians believed that when it comes to the worst he could fly to South Africa or Europe, either by himself or through the assistance of the government to receive a better medical care.

Beside Mr P. V. Obeng, the list below shows some of the other politicians or their families that have died or had serious road accidents in recent years, which some may have been caused by lack of appropriate facilities to response to emergency situations:

1. Former President Mills died in July 2012 in office. While the immediate circumstance leading to his death still remains a mystery, it is believed that he suffered from throat cancer and sought medical care in many countries including USA and South Africa because Ghana does not have the appropriate health care facilities to cater for him. It is even believed that in his dying moment, he was transported to a maternity ward at 37 Military hospital in a private car; what a pathetic end for a whole president!

2. Just some few years ago, the M.P. for Kwabre West and former Deputy Attorney General, Emmanuel Owusu Ansah passed on. It was reported that when he collapsed at home he was rushed to the Achimota hospital and from there he required a transfer to Korle- Bu for further treatment but the Achimota hospital ambulance was not in a good condition, but as a Member of Parliament, an ambulance from parliament was sent to take him to Korle Bu. At Korle Bu, he was supposed to have a MRI scan but the scan machine was faulty, and while authorities and family members prepared to take him to Adabraka poly clinic, he died. Also, 3 weeks before Mr Owusu Ansah's death, Alhaji Saani, Iddi, the M.P. for Walensi had passed on.

3. Major Courage Quashigah, former Minister died in 2010 while he was receiving treatment in Israel.

4. Mr Baah Wiredu (former Finance Minister) died at age of 56 in office, while he was receiving treatment in South Africa.

5. Several years ago, Alhaji Inusah Fuseini, then a Deputy Minister is said to have lost her wife when the wife was having birth at the police hospital.

6. Just less than a year or so ago, Mrs. Anastasia Wiredu Mensah, the 2012 NPP parliamentary candidate for Prestea Huni/Valley constituency died in Sunyani hospital when she had baby twins.

8. Other politicians that have also died young and/or suddenly include Hawa Yakubu and former Vice President Aliu Mahama.

Besides the above, some politicians have experience serious road accidents including Dr Bawumia's accident in Mach 2013, Kwabena Agyepong near Nsawam about two months ago, Alhaji Mumuni, the then NDC vice presidential candidate in 2004 and Thomas Osei smashing into President Kuffour's car while the former President was travel to his office. While speed and other factors may contribute to some of these accidents, there is no doubt that the poor state of the roads are also part to blame.

An Akan saying goes that ''Fofie anto Atta amma no andware abam''. To explain, the Akans had a custom to perform some rituals when twins were born and this was done only on one of the sacred Fridays on Akan calendar, which occurs every forty days or so. It was believed that unless the ritual was performed the twins would not survive. However, some new born twins passed on before the next 'Fofie' Friday. In other words, many Ghanaians politicians and richest may have the resources to fly overseas to seek good medical care, but what about if one suffers an acute sickness that may not give the person an adequate time to fly overseas or something like that. Thus, improving the home health care for the use of everyone is the sensible thing to do. But unfortunately, this is not something that an average Ghanaian politician thinks about. Just two days ago, I was listening to a radio in Sydney and a lady said she left her backyard door opened and a thief came in. She was in the bedroom and she called a police and less than five minutes the police were already there. Similarly, about six years ago, my alarm went off in the night and I thought a thief had broken in. I called a police and within 5 to 10 minutes three separate police cars arrived. It turned out that the alarm had gone off by itself because maybe a spider walked on the sensor. Yes, within 5 to 10 minutes I managed to have several police to catch a 'spider-thief' for me. What would have happened to me or the lady if we had called a Ghanaian police in a similar circumstance? I believe the police will never come because either they do not have car or they do not even know the place to come. In the same way, ambulance response to emergency calls that way in Sydney. In some cases, helicopters equip with medical facilities transport the sick persons if there is the need for that, irrespective of the status of the person. The reason is that the Australian politicians consider human's life as precious and worth saving at any cost.

From the above it is clear that unless the Ghanaian politicians realise the need to establish good health care system, they will also continue to die in the same way that the poor die because sickness and death can strike anyone at any time, but adequate quality health care services in a country minimises the chances of that happening or the effect of an unexpected serious illness. Many people die in Ghana of accidents because of lack of appropriate and quick emergency responses.

So why are many Ghanaian politicians so greedy and only interested in amassing wealth and neglect their responsibility to provide the basic services and necessities for the benefit of everyone? Despite their desire to amass wealth either by foul or proper means, their wealth does not help them when they need it most. Do they not get ashamed of themselves when they see many Ghanaians swimming in abject poverty? Do they really have conscience?

I find it strange that people scramble for money and build several mansions. The fact is that whether you have twenty mansions or renting one bedroom, you can only sleep in one bedroom every night and even that one bedroom, depending on how big the room is, your bed will be occupying just a small part of it, and if you are like me who does not turn very much, you are most likely to occupy only a half side of a bed throughout the night even when you are sleeping alone. So why scramble for all these riches to the extent that our fellow brothers and sisters do not benefit from the resources of the country. I am sure if the politicians stop corruptions and etc they will still have enough to live comfortably, while the rest of the population will also receive some of the resources that will enable them to live descent lives. After all, based on an average life expectancy of 80 years, many people will spend only about 29,200 days on this earth. An average Ghanaian will even spend far less than that. So why taking all these monies from the states when neither yourselves, children nor grandchildren will ever need that much? How many cars can one travel on at a time?

Until the Ghanaian politician realises that he is in office to serve the public and not to steal money, though many vulnerable in the society will die prematurely, the politicians will also die prematurely because they fail to provide for facilities that can save everyone's life. Therefore, the way that President Mills, PV Obeng and others have died should remind the Ghanaian politicians that we are just transient on this earth and sooner or later, we will leave everything behind (as Amakye Dade states in one of his songs).

To conclude, I am not suggesting that getting money through appropriate means is bad, however, getting money at the expense of others is bad. This is why Jesus stated in Luke 12:15 that "Watch out! Be on your guard against all kinds of greed; life does not consist in an abundance of possessions."