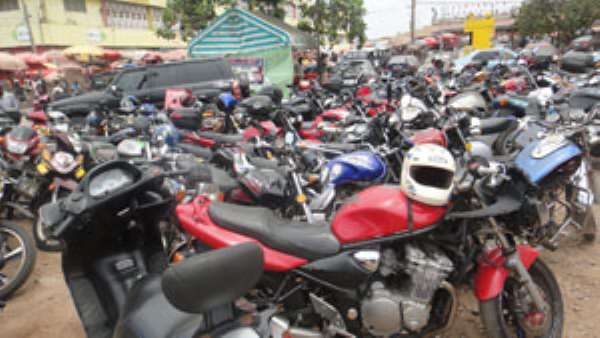 Survivors of motorcycle-related crimes heaved a sigh of relief when the Greater Accra Regional Police Command mounted an operation to rid the nation's capital of unregistered motorbikes.

For miscreants who use this means of transport to execute their deadly ploys often in the dead of night and sometimes during the day, they cannot have charitable words for the operation.

The Tema Police Command had undertaken a similar exercise earlier following a number of murders committed by motorbike-riding criminals in the port city.

We appreciate the concerns raised by some persons, especially radio station discussants on the pros and cons of the operation against the backdrop of inconveniences suffered by otherwise responsible motorbike owners.

We cannot pretend that the use of motorbikes has not assisted many in surmounting the challenge of transportation in urban settings today. We would be equally giving impetus to irresponsible elements and criminals who use the vehicles for negative purposes.

The issue of the use of motorbikes as commercial commuters in intra-city transport has been discussed before in the court of public opinion.

Eventually, it was outlawed through a relevant legislation in Parliament, and it still holds.

Interestingly, the man who is now the Greater Accra Regional Minister, Mr. Afotey Agbo, reportedly kicked against it when he spoke to some okada or commercial motorbike riders in Ashaiman.

He was obviously seeking political leverage as an election was impending when he said he would not support any move to scuttle the okada business; something we found absurd, given the fact that he was part of the legislature which outlawed it.

ACP Awuni Angwubutoge, now Director of the Motor Transport and Traffic Directorate of the Ghana Police Service at the Police Headquarters, was then in charge of the MTTU in Accra.

The Superior Police Officer who was then leading the charge against the illegality could not have had the necessary support to accomplish the mission when an MP/Minister openly sabotaged the law.

Now that the police appear to have decided to mount this operation, we salute their courage but pray that they would close their ears to entreaties to let sleeping dogs lie.

Consistency is an important ingredient in such missions. We are therefore asking that the exercise is not turned into a nine-day wonder – one meant for the newspapers and the television screens.

Given the overwhelming advantages of regulating the use of motorbikes as means of transport, we ask that the law enforcement agents return to the drawing board with the relevant stakeholders with a view to coming out with a better means of executing the project.

It is not right, for instance, to seize the motorbike of genuine owners with all the necessary paperwork and ask them to come later for screening at a designated police station.

Perhaps owners or riders should be asked to carry their documents when they set out from the house. Such riders should also conform to the laws regulating the use of motorbikes. This is an effective way of sparing responsible riders the avoidable inconveniences associated with the exercise.

Okada-owning cops – and there are many – would do all they can to sabotage the exercise. Knowledge of this would assist the police as they seek to rid our roads of dangerous elements who are using motorbikes.