Come On, Alan Is A Dead Horse! 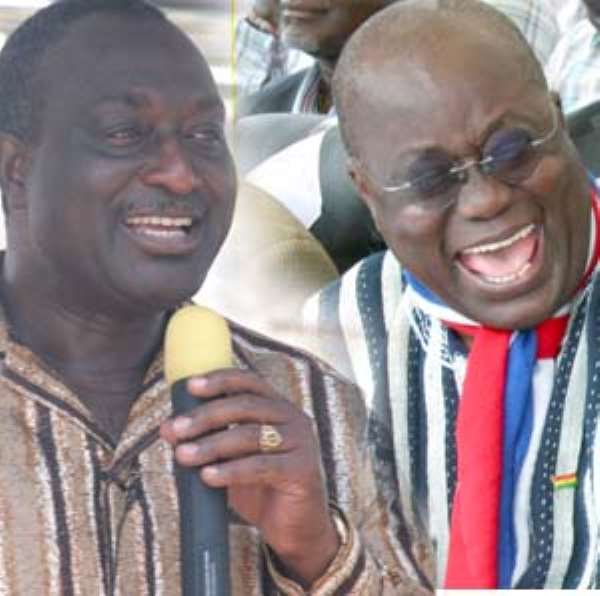 I sympathize, somewhat, with staunch New Patriotic Party (NPP) stalwarts like Mr. Edward Enin, the Member of Parliament for Obuasi-East; but the fact of the matter is that Mustapha Hamid tells it like it is when he admonishes Alan John Kwadwo "Quitman" Kyerematen to take a hike, by either forming his own party, or even running as an independent presidential candidate for Election 2016 (See "Akufo-Addo Must Call Mustapha Hamid to Order - NPP-MP" MyJoyOnline.com / Modernghana.com 4/17/14).

In 2008, for instance, as a parting shot to the NPP's Committee of Elders, led by the now-late Mr. B. J. DaRocha, that had been set up to resolve any differences between Mr. Kyerematen and Nana Akufo-Addo, in the aftermath of the latter's trouncing of the former in the party's presidential primaries, Mr. Kyerematen made it patently clear that the NPP, as a political organization, was too small of an ideological canvas and woefully insignificant to embody his vaulting presidential ambitions.

And so to Mr. DaRocha's advice that Alan Cash, as Mr. Kyerematen is widely known, needed to shelf his petty personal concerns for the greater good of the party, the then recently defeated aspirant for the New Patriotic Party's presidential nomination rudely shot back by asserting that the greater good of the nation far superceded that of the party for him, Mr. Cash, to even think of rescinding his formal resignation from the NPP. He also jauntily signaled the nebulous chances of him ever resuming his membership status in the party.

In other words, for Mr. Kyerematen, the NPP is too small a tent to contain his epic and oversized political ambitions. And to be certain, it is the latter reason that staggers those of us avid independent obsevers of the turbulent internal affairs of Ghana's largest opposition party. I am here, of course, alluding to the decision by the party's movers and shakers to allow Mr. Cash to shamelessly rejoin the membership of the party and then almost immediately take a second shot at the party's presidential primaries.

It also makes one wonder whether this arrogant and impenitent renegade paid off some party bigwigs in order to skip his turn at the bottom of the queque (apologies to ex-President Kufuor), or it is simply that the New Patriotic Party is largely composed of pathological wimps who are too jittery and incapable of realizing the stark truthfulness of the proven Einsteinian maxim that the deliberate repetition of a failed mode of operation is no laudable exhibition of genius leadership.

Already, some party touts who in the recent past pretended to be in the corner of Nana Akufo-Addo, including one midget "Okatakyie," are forcefully claiming that the time has come for Mr. Cash to take over the leadership of the NPP. But the grim fact of the matter is that their trophy horse has long proven himself to be jaded and even far less attractive and winsome a candidate than the man they would have shoved off the cliff to make way for this decidedly spayed and emasculated stallion.

I think the man himself fully recognizes this painful truth, thus his contradictory conflated statement to the damnable effect that even though he is too famous to require any introduction and/or promotion by any party bigwig, nevertheless, Nana Akufo-Addo's "popularity may not necessarily" catapult the NPP into the Flagstaff House come Election 2016. And so the relevant question for Mr. Enin, the Obuasi-East MP, is the following: Wherein lies the grievous wrongdoing of Mr. Mustapha Hamid, the longtime Akufo-Addo spokesman, in boldly admonishing Mr. Cash to vamoose with his shinplaster of a money bag?

And now speaking about "floating voters": Is Mr. Enin claiming that this nondescript and slippery category of wishy-washy eligible voters is the especial preserve of the Cash Man? And if the party lost out on these halfway-house hobos in two critical elections, what makes the Obuasi-East "Honorable" think that they are bound to come home to roost on the rafters of the NPP?

Are we also being given by Mr. Enin to believe that the shortest and most certain route to the Flagstaff House, on the part of the movers and shakers of the NPP, is by playing dumb and being fatheaded in allowing Mr. Money Bag to run circles and rings around their feet like hunted quarry or prey? Fat chance!

The author has 5456 publications published on Modern Ghana.