Bekele says in shape for marathon debut in Paris 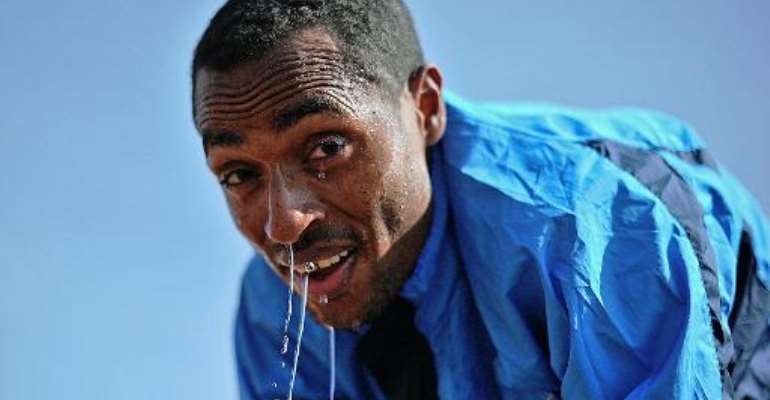 Addis Ababa (AFP) - Ethiopian running legend Kenenisa Bekele says he is in shape and hopeful for a win ahead of his hotly-awaited marathon debut on the streets of Paris on Sunday.

The double world recorder holder in 5,000 and 10,000m will be the star draw at the Paris marathon, and although not considered a world record course like Berlin, Chicago, or London, all eyes will be on Bekele to see how he manages the leap to track superstardom to the ultimate distance.

"I have a good chance to win because I prepared well. I will run to win, I cannot expect myself to lose," he told AFP. "I can't sit, I can't sleep... it's the race."

Bekele said his training volume peaked at 240 kilometres (150 miles) a week, all of it at high altitude at his training base in the hills outside Addis Ababa. He admitted though that he found the higher volume of training for a marathon was at times "boring".

Now tapering his training for the big day, he said he was just running easy and mixing in some shorter track sessions.

After an illustrious career in shorter distances, the 31 year-old is hoping to follow in the footsteps of Ethiopian "emperor" Haile Gebreselassie, who made a successful leap from the track to the marathon.

Bekele has made a stunning comeback from a debilitating calf injury which kept him out of competition for nearly three years.

In September, he defeated Gebreselassie and his track rival Mo Farah in his comeback race at the Great North run –- his half marathon debut -– outkicking Farah in the dramatic final stretch of the 21.1 kilometre (13.1 mile) race.

Farah will be making his own marathon debut in London a week after the Paris race, but Bekele has opted not to go head to head with him in the London marathon, where the competition is likely to be far more intense because of the presence of a strong Kenyan contingent.

While Bekele said he is not putting too much pressure on himself, he is aiming for winning results in Paris this weekend.

"It's very special," he said. "It's great if I will win in my first marathon, it's amazing, it's a great thing you know if I really achieve it."

Bekele's toughest competition will come from a pack of seasoned fellow Ethiopians that include Abdullah Shami, who has a personal best of 2:05.42.