Soldiers who killed 24 in CAR were attacked first, says PM 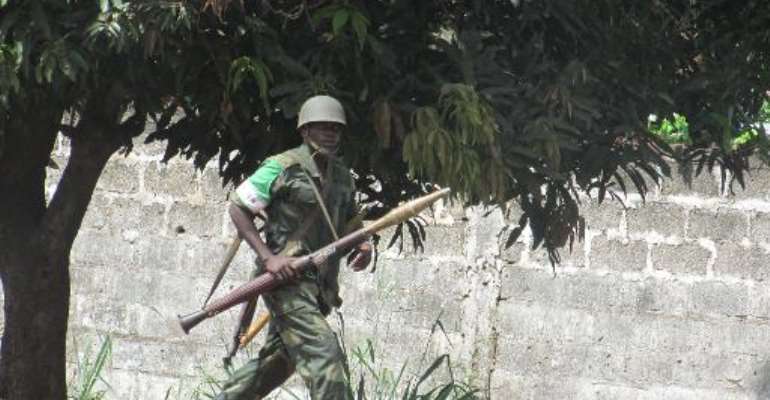 An African Union intervention force (MISCA) holds a rocket launcher as he secures the area during an operation to free the way leading to the north of Bangui on March 25, 2014. By Pacome Pabamdji (AFP/File)

Speaking on national radio, Andre Nzapayake said the attack in the capital on Saturday "was the result of an incident involving a contingent of (African peacekeeping force) MISCA, which was responding to grenade attacks".

The soldiers, from neighbouring Chad, had come to help their citizens flee from the war-torn Central African Republic.

On Saturday, they fired into a crowd, killing at least 24 and injuring around a hundred people, in the worst-known incident involving foreign troops since French and African peacekeepers deployed late last year.

A MISCA officer said on Sunday that the soldiers had fired after they were attacked, but locals and members of the local "anti-balaka" militia said the soldiers had deliberately fired on the crowd.

"The toll was large," Nzapayake said, warning that the death toll may still rise given the number of seriously injured. "Many dozens were injured or killed, more than a dozen houses were burnt down, and men and women injured by artillery fragments from a rocket thrown by armed men".

He said the government "strongly condemned" the violence, and called for an inquiry to determine the exact circumstances of what happened "so the perpetrators can be identified, tracked down, and tried".

With the circumstances surrounding the attack unclear, the country's transitional president Catherine Samba Panza said on Monday that there would be an investigation.

She was in Brussels on Wednesday to discuss declining security in the conflict-hit nation, with UN Secretary General Ban Ki-moon warning recently that people in the country are facing "grave and deplorable atrocities".

In the past year, the country -- one of the poorest in the world -- has been racked by Muslim-Christian fighting that has claimed thousands of lives and left hundreds of thousands of people displaced.

In the last few weeks, the mainly Christian anti-balaka militias have been accused of spearheading violence against Muslim communities.

The militias were formed last year in response to a coup in March 2013 by the mostly Muslim Seleka rebel group.