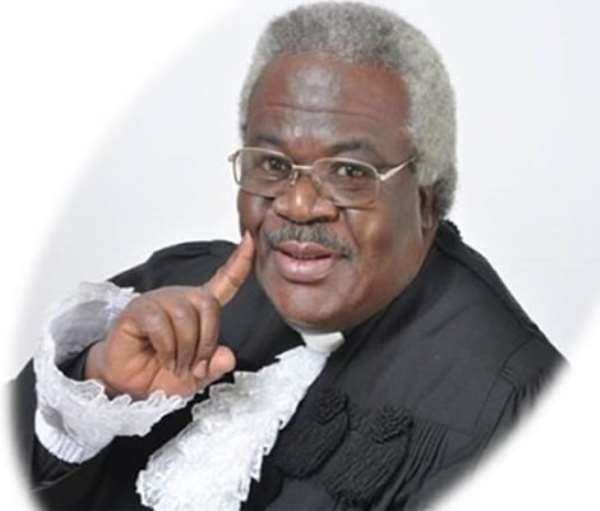 He is the head of the Presbyterian Church of Ghana. And as a religious leader he is supposed to wield the double edged-sword and hold everybody including leaders and aspiring leaders of the country accountable. That has been the moral and character traits of true Christian leaders throughout the world.

But Rt. Rev. Prof. Emmanuel Martey is definitely not following the likes of Paul, Peter and John among others who we daily read from the Bible, because his sword is always pointed towards just one direction. And he has made it his cardinal rule to always cut President Mahama and the NDC to pieces anytime he gets the opportunity.

Many people have looked on with horror as Rt. Rev. Martey is not setting any good example to Ghanaians but has made sheer criticism of President Mahama and the NDC government his daily bread. The other day Rt. Rev. Martey urged Christians to enter into politics, saying it is pertinent for Christians to get involved so as to keep evildoers at bay from capturing power to rule over the righteous.

The bible says explicitly in Romans 3:10 that, as it is written: None is righteous, no, not one”. This quote I strongly believe includes Rt. Rev. Prof. Emmanuel Martey, unless he thinks he sits next to God.

I have this other quote from James 1:19-20 for Rt. Rev. Martey to digest, “Know this, my beloved brothers: let every person be quick to hear, slow to speak, slow to anger; for the anger of man does not produce the righteousness of God”.

I guess Rt. Rev. Martey also needs to read this quote from James 4:11-12 “Do not speak evil against one another, brothers. The one who speaks against a brother or judges his brother, speaks evil against the law and judges the law. But if you judge the law, you are not a doer of the law but a judge. There is only one lawgiver and judge, he who is able to save and to destroy. But who are you to judge your neighbour?

I will be the first to endorse the candidature of Rt. Rev. Martey if he decides to run for President in 2016, because in his estimation there is no one who is perfect in this country except him. He has put himself as the yardstick for everybody in this country to follow yet this man has done little to clean up the mess in the Presbyterian Church of Ghana.

In fact in some instances Rt. Rev. Martey has moved with speed to cover the rot to save his church from embarrassment. In case you have forgotten, Rt. Rev. Martey is yet to settle the issue involving one of his priests who was accused in 2013 of being gay and sleeping with boys in the church.

Just last week, Rt. Rev. Martey who wants to appear in the news every week stated that, “We are living in a corrupt society, and that Ghanaians should not look up to today's leadership because they are not giving us any good examples”.

I was so happy when I read this quote from Rt. Rev. Martey because when we talk about leadership in the country we do not only mean political leaders but it also include spiritual or religious leaders with Rt. Rev. Martey being one of them. Therefore, if Rt. Rev. Martey is asking Ghanaians not to look up to today's leadership because of their lack of good examples, then what it means is that he Rt. Rev. Martey has failed as a leader.

Another statement that Rt. Rev. Martey made during the thanksgiving sermon to climax the 87th Speech and Prize-Giving Day of the Krobo Girls Presbyterian Senior High School at Odumase–Krobo in the Lower Manya Krobo Municipality was that Ghana needs leaders such as the Moses', the Daniels' and the Josephs'. Of course Rt. Rev. Martey should not have forgotten the Nehemiahs'.

Nothing that President John Mahama and the NDC have done or continues to do excite Rt. Rev. Martey who has teamed up with others to rant and rant no matter any good thing they see in this country. You will not be far from right to label them the Sanballats and Tobiahs of our time.

I will be watching Rt. Rev. Martey with very critical eyes going forward and will respond to any of the garbage he spews. The clergy must never be allowed to use the pulpit to do the biddings of their political parties because the country does not belong to one single political entity.

If I want to be mentored by a member of the clergy, Rt. Rev. Martey will certainly not be considered because he has not set any good imprints in the sand.

Bear with us on the border closure — Oppong Nkrumah to resid...
21 minutes ago