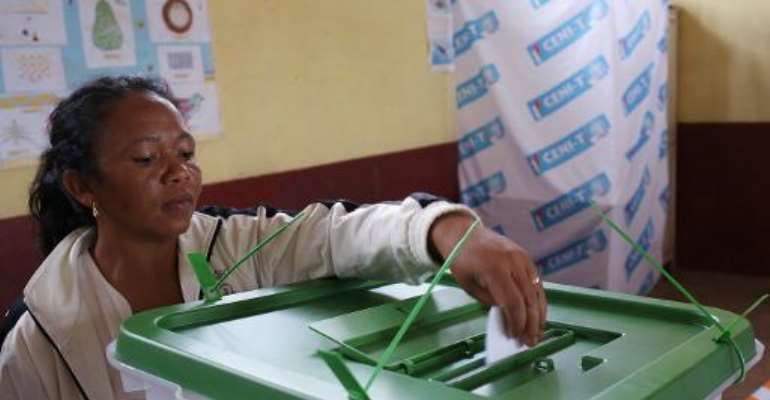 A woman casts her ballot at a polling station during the presidential election on December 20, 2013 in Antananarivo, Madagascar. By Alexander Joe (AFP/File)

By late Sunday, the current strongman's candidate, Hery Rajaonarimampianina, was leading with 15 percent of votes counted, though both sides accused the other of fraud and his rival, Robinson Jean Louis, demanded a publication of the results be suspended.

But international observers said they could fault little so far.

"According to the parameters and methodology of the European Union, the elections were free, credible and democratic," said EU mission chief Maria Muniz de Urquiza of Friday's vote to restore democracy to the island nation.

She still cautioned that "the process has not finished. We have to wait for counting to end and the reporting of the results," after both candidates claimed victory in an ominous reminder of similar disputes during 2001 polls.

The parliamentary and run-off presidential polls were aimed at ending stagnation on the island state after current leader Andry Rajoelina seized power from Marc Ravalomanana in an army-backed coup in 2009.

The two foes were barred from running for the presidency as the international community fears a return to violence, but proxy candidates ran instead.

Other commentators also judged the polls free and urged the candidates to accept the outcome.

Observers from the Carter Center and the Johannesburg-based Electoral Institute for Sustainable Democracy in Africa (EISA) found "that voting and counting processes were peaceful, orderly," they said in a statement.

"All the members of our team have confirmed that everything happened transparently, and we don't have any reason to believe that there has been rigging," he said.

Technical, logistical and financial challenges complicated the vote during the rainy season on the world's fourth largest island.

The Carter Center also noted a "few shortcomings", such as inconsistent use of separate voters lists for the presidential and parliamentary polls and late delivery of materials.

But it stressed "these shortcomings were not systematic and will not impact the outcome of the elections."

Turnout was low -- less than half the former French colony's 7.9 million eligible voters, according to the EU.

Mutual mud-slinging has marked the long wait for the result.

"We are calling for the result publication to be halted and want to check all the ballot boxes to see if there are any pre-marked ballot papers," Jean Louis, 61, protege of ousted president Ravalomanana, told reporters.

The freemason doctor claimed victory after his teams collected "80 percent of results all over Madagascar" that he said showed he won 65 percent of the vote. On Saturday he had claimed 56 percent.

His rival, former finance minister Rajaonarimampianina, claimed a similar result in his favour.

The election commission, police and observers have so far confirmed no fraud allegations.

One observer experienced in elections in high-risk areas said of Jean Louis's claims of ballot fixing: "It's a classic case that candidates who don't get the score they hoped for claim fraud."

Rajaonarimampianina, 55, a former finance minister under Rajoelina, led with 53.63 percent of votes against Jean Louis's 46.37 precent, with 3,047 polling stations out of 20,001 reporting by the evening.

Final results are not expected before January 7, to be confirmed by the election court by February 18.

Friday's presidential run-off after an inconclusive first round on October 25 coincided with a vote for 151 parliamentarians.

"What needs to happen now is the two camps have to accept the result," one foreign observer told AFP Saturday.