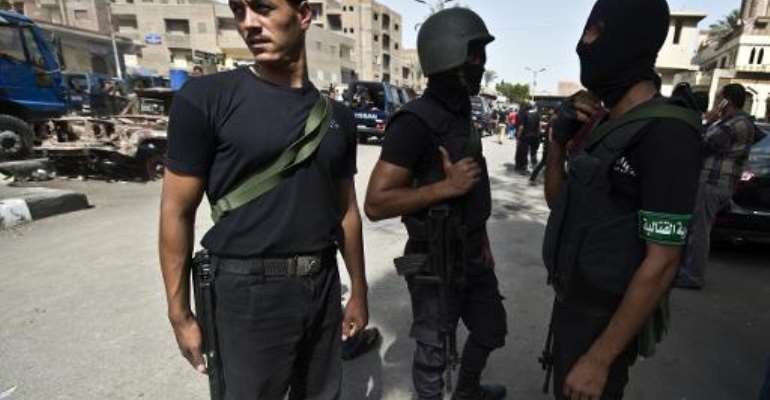 Egyptian armed policemen are deployed in a street during a raid in the village of Kerdassah on the outskirts of Cairo, on September 19, 2013. By Khaled Desouki (AFP/File)

Cairo (AFP) - A Cairo court on Thursday acquitted three former police officers on charges of torturing five Islamist militants who were in their custody during the rule of former president Hosni Mubarak, judicial sources said.

The ex-officers were accused of giving electric shocks to the militants, depriving them of food and beating them during their interrogations.

It is unclear whether the five militants are still in jail or have in the meanwhile been freed.

The judgement comes a day after a court in Egypt's second city of Alexandria sentenced 14 women it said belonged to the Islamist Muslim Brotherhood to 11 years in jail, and another seven minor girls to a juvenile detention centre.

The women and girls were accused of participating in a violent protest in October.

Their sentencing is the latest in an ongoing government crackdown against supporters of former president Mohamed Morsi since the army toppled him on July 3.

More than 1,000 people have been killed in the crackdown and during clashes between pro- and anti-Morsi groups, while thousands have been arrested, mostly Islamists, in the often deadly crackdown.

Morsi was voted into office in the country's first free election following Mubarak's ouster in a popular uprising in January 2011.