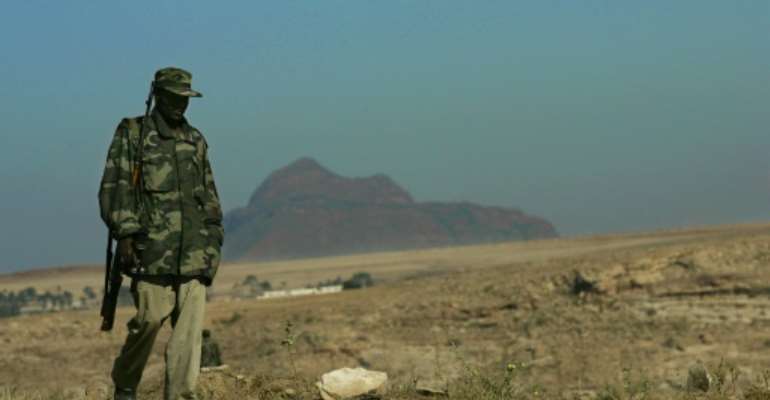 An Ethiopian soldier patrols near the Eritrean border in the northern town of Zala Anbesa in the Tigray region on November 19, 2005. By Marco Longari (AFP/File)

Addis Ababa (AFP) - Arch-rivals Ethiopia and Eritrea traded blame Tuesday for one of the fiercest border clashes since a 1998-2000 war, with Addis Ababa warning any further conflict is "up to Asmara."

The neighbours are bitter enemies, with tens of thousands of troops dug into trenches eyeing each other along the heavily fortified frontier.

On Sunday, fighting broke out around the Tsorona area -- reportedly involving heavy artillery -- with each blaming the other for starting the fight and claiming heavy losses suffered by their opponent.

Open-ended, compulsory national service makes Eritrea one of the world's most militarised nations, but with just five million citizens it is dwarfed by Ethiopia, Africa's second most populous nation with some 96 million people.

"We're capable of waging a full scale war against Eritrea, but we choose not to," Ethiopian government spokesman Getachew Reda said on Tuesday.

"I hope they won't repeat the mistake of inviting us to wage a full scale war."

The 1998-2000 border war claimed nearly 80,000 lives. No death toll has been given for Sunday's clash but Getachew described the skirmish as "a major engagement".

Ethiopia said the fighting was now over, and that it had been a warning message to Asmara.

"We don't think they expected the kind of response that we mounted. The measures we have taken in the last two days will send a sufficiently clear message to the regime," Getachew said.

Eritrea's Ministry of Information on Tuesday criticised what it said was the "latest act of military aggression" by Ethiopia, and claimed to have repulsed the assault with the Ethiopian troops "sustaining heavy causalities".

Thousands of Eritreans risk their lives to flee the hardline regime every month according to the UN, but Asmara said Ethiopia had attacked partly because it was jealous of conditions in Eritrea.

"Mounting opposition from popular movements of the Ethiopian people, endemic corruption and associated economic crisis, as well as the desire to stem promising progress in Eritrea are indeed some of the factors prompting the TPLF (Ethiopian) regime to indulge in reckless military adventures," Eritrea said in a statement.

Last week the United Nations Commission of Inquiry on human rights in Eritrea said the government of President Isaias Afwerki, in power since 1991, was guilty of systematic enslavement, forcible conscription and other abuses.

Eritrea rejected the findings as "laughable."