Busia's Mausoleum Must Be Protected 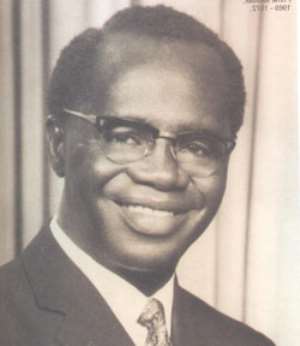 I have had this computer printout for sometime now. It deals with the centenary celebration of the immortalized Prime Minister Kofi Abrefa Busia. There is really not much content to it; of course, I am talking about the news item itself, and not the subject of the news report. It essentially talks about the program lineup for July 11, 2013, featuring the usual suspects, as it were, namely, former President John Agyekum-Kufuor, Nana Addo Dankwa Akufo-Addo and two of the daughters of the man whose great achievements in life are being celebrated, namely, Ms. Amma Busia and Prof. Abena Busia.

The news item also highlights the fact of the subject of celebration having been as remarkable for his statesmanship as he was a scholar and a great mind of the finest breed. It is titled "Centenary Celebration of Dr. K. A. Busia Begins This Week" (MyJoyOnline.com/Ghanaweb.com 7/8/13). I don't quite know why I haven't shredded this yellowing piece of news, except for the fact of my firm belief that every media printout has the potentiality of generating something refreshingly newsworthy and meaningful in the offing. I guess this belief emanates from the fact of what originally motivated my decision to print out such material, in the first instance.

Anyway, those of you who have been following my offerings on Prime Minister Busia in recent months, may be well aware of the fact that I am in the process of putting together a general interpretive survey of the thoughts and scholarship of this great Ghanaian and African leader and personality. This kind of project necessitates voraciously reading up on available knowledge and documents on the subject; and such documents include any bit of information as the one presently under discussion.

The real thrust of this write-up regards the recent report of the dastardly attempt of some two reprobates to desecrate the tomb containing the mortal remains of Prime Minister Busia. I have said this before and hereby reiterate the same - the level of enlightenment of any nation, or civilization, is keenly reflected in the way and manner in which the memory of its s/heroes and leaders is preserved, both materially and intellectually. On the latter score, Ghana does not have much to brag about.

Anyway, since the report of the wanton desecration of Prime Minister Busia's tomb was published, I have yet to hear the Mahama government of the so-called National Democratic Congress (NDC) issue an official and definitive statement on the imperative need to honorably preserving and cherishing the memory of our most distinguished and oustanding leaders. That Busia was both a distinguished and an outstanding Ghanaian leader does not seem to be of any moment to the Mahama government. And this is rather ironic for a government that cynically capitalized on the demise of President John Evans Atta-Mills to establish what virtually amounts to a presidential mausoleum.

Now, I don't know that any of the three NDC presidents that have held the reins of governance, so far, in Ghana's Fourth Republic, namely, Messrs. Jeremiah John Rawlings, John Evans Atta-Mills and John Dramani Mahama deserve to have their mortal remains perennially preserved in a historic landmark. None of these "leaders," for want of an apposite term, has any remarkable track record of progressive leadership. Still, with the glaring exception of President Mahama, these patently mediocre leaders had been elected by the Ghanaian people and ought to be regarded as such.

By the way, I am personally not an enthusiast of the presidential mausoleum fever. The general level and caliber of Ghanaian leadership leaves too much to be desired, let alone glorify and lavishly celebrate with the kind of collective memorials or mortuary monuments that the tourist finds in such socialist polities as the erstwhile Soviet Union, China, North Korea and Cuba. What I am an avid enthusiast of, though, when it comes to the solemn preservation of our collective national memory in the mortuary celebration of our fallen leaders and s/heroes, is to have their places of interment - preferably in their hometowns and villages - afforded custodial upkeep by governments of the day under the auspices of a Ministry of Parks and Monuments.

Well, I am no enthusiast of "nationalist mortuaries," because I firmly believe that talents and leadership skills and savvy abound in each and every part of our august Republic and ought to be celebrated as such. The implication here is that the protection and upkeep of the burial grounds of our leaders, irrespective of ideology or political suasion, ought to be the inescapable responsibility of our government. It is also a potentially lucrative industry that has the double benefit of creating employment for mortuary science specialists and decently preserving the memory of our heroes and leaders for the cultural enrichment and intellectual development of posterity.