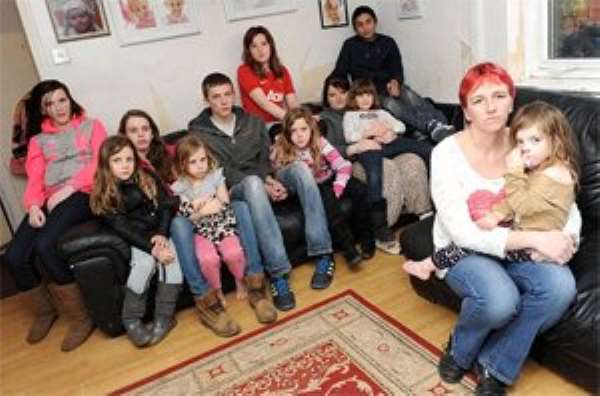 Earlier this year, jobless mother of 11 Heather Frost caused outrage when it was revealed that she would be moving into a taxpayer-funded £500,000 home with her brood.

But although the resulting furore cost her the house, Frost, who appears in new Channel 5 documentary On Benefits And Proud, is unrepentant.

In the film, the foul-mouthed 37-year-old from Gloucestershire is seen telling her friends that as far as angry taxpayers are concerned, her view is 'f*** the lot of them.'

'Every child needs a house, a roof over their head I should say, don't they? It wasn't our choice for the council to build a new house, it was theirs.

Frost, who receives benefits totalling £900 per week – the same as someone who earns £60,000 a year – is now looking forward to a council-funded renovation of her current home, which will see the two three-bedroom houses she currently occupies knocked together to create a permanent six-bedroom house.

The cost of the renovation will run into thousands of pounds, and includes a new kitchen and bedrooms.

But despite the vast expense to taxpayers, who spend a staggering £100 million on benefits every day according to Government figures, Frost, who has never had a full time job, says the system is put there to help people like her.

'Yes, it's my choice and my decision to have a large family but there's no law out there to say how many kids you can have or can't have. There's people out there with more kids than me, that's my argument. '

She adds: ' Fred West or someone who murdered someone wouldn't have got as much s*** in the press as what I got.

'You only get what you're entitled to. We have to budget. You know, a weekly shop costs quite a bit, then gas and electric for both houses – it's all got to come out of it.

'By the end of the week, you can guarantee you're skint. We can't afford to take the kids to Spain or on posh holidays.'

As a result, in order to make ends meet, Frost says she is forced to enlist the help of local shoplifters who sell her purloined goods for half the price of what she would splash out legally in a shop.

'Everybody has to get stuff off shoplifters, don't they,' she says. 'Wouldn't have enough to live otherwise.