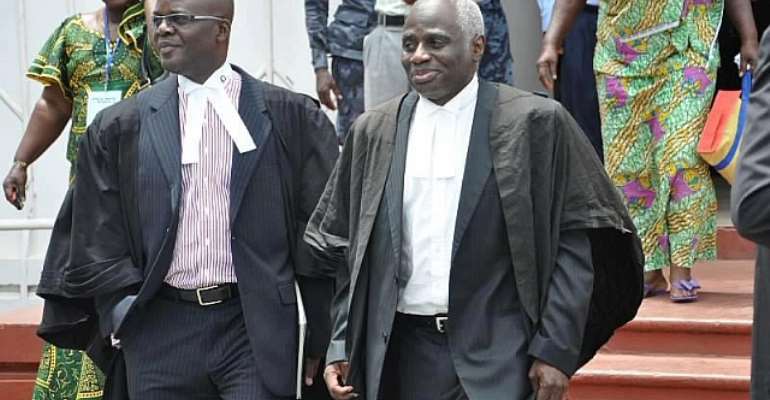 First of all, he ought not to have been allowed to stand in front of our august Supreme Court as counsel for the third respondent, the National Democratic Congress (NDC). And were the president of the nine-member panel of jurists who heard the 2012 Presidential Election Petition a man of unimpeachable integrity, Mr. William Atuguba would have politely advised the key operatives of the NDC to find a lawyer with a clean personal and professional reputation.

Unfortunately, the country's judicial system, being the ready quarry that it is, and has been, to the criminal predation of Mr. Rawlings and the Tsikata Abongo Boys, the man whose wicked counsel to Capt.(Rt.) Kojo Tsikata may well have factored into the heinous abduction and summary execution - Mafia-style - of the three Akan-descended Accra High Court judges (I am told the regime of Gen. I. K. Acheampong had abolished the Supreme Court), was flagrantly allowed to participate in the Akufo-Addo-led Election 2012 Presidential Petition against the fraudulent declaration of Mr. John Dramani Mahama as winner by Dr. Kwadwo Afari-Gyan, the criminally minded Electoral Commissioner.

And now, Tsatsu "The Thief" Tsikata, a justifiably convicted felon, has the temerity to accuse Justice Anim-Yeboah, one of the nine judges who heard the Election 2012 Presidential Petition, of ideological bias. Maybe the Keta School Boy, pun intended, had been banking on his criminal participation in the summary execution of Justices Koranteng-Addow, Sarkodie and Agyepong having instilled adequate fear in Justice Anim-Yeboah to cause the latter to vacate the faculties of his moral integrity and cognitive acuity by blindly returning a verdict that gratuitously affirmed the fraudulent conduct of the Mahama-led National Democratic Congress in Election 2012. Sorry, Tsatsu "The Thief" Tsikata, but not every jurist on the Supreme Court is afraid of monsters like you and your Cousin Kojo (See "Tsatsu Accuses Justice Anim-Yeboah of Political Bias" Radioxyzonline.com/Ghanaweb.com 8/31/13).

And just why did Mr. Tsikata decide to single out Justice Anim-Yeboah for consistently voting against the stance of the respondents, when the president of the nine-member judicial panel hearing the case, Justice William Atuguba also consistently voted against the grievances of the petitioners, including those of over-voting and non-biometric verification voting? Is this simply because Justice Anim-Yeboah was appointed to the Supreme Court by former President John Agyekum-Kufuor that, in the warped opinion of Mr. Tsikata, the former has absolutely no right to express any opinion or judgment deemed to contradict the cynical stance of the NDC respondents?

Likewise, does merely having been appointed to the Supreme Court by Chairman Jerry John Rawlings make Justice Atuguba's clearly conflict-of-interest ruling all the more politically correct and laudable? You would think that a fairly reasonably well-educated felon like Tsatsu "The Thief" Tsikata would know better. Then again, what am I talking about here? After all, isn't the man a convicted felon?

It also well appears that the former also-run Legon law school lecturer has a personal vendetta against Justice Anim-Yeboah, whom Mr. Tsikata morbidly faults for facilitating his conviction as a member of the Appeals Court. Which makes Tsatsu the far more ideologically tainted NDC counsel going into the Election 2012 Presidential Election Petition. Among the highly civilized and philosophical Akan, there is a maxim that runs as follows: "Whenever one points one's accusatory index-finger at another person, the three other fingers point squarely at the accuser." We hope Mr. Tsikata is reasonably smart enough to fully appreciate this felicitous filigree of the imagery-rich Akan mind.

Demonstrate diligence and honesty in your work – Outgoing KM...
2 hours ago