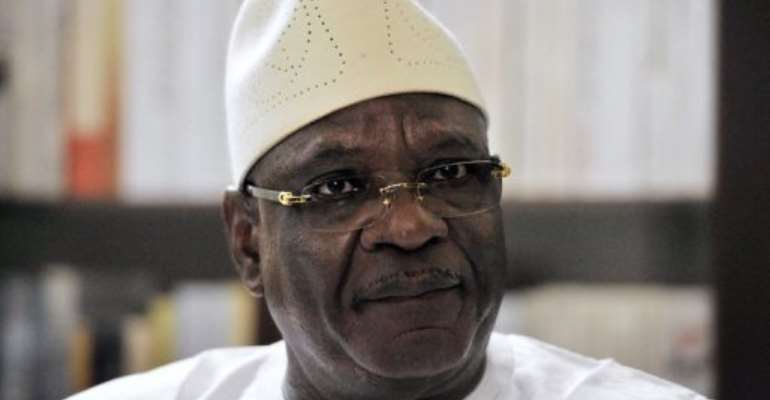 Ibrahim Boubacar Keita speaks in an interview in Bamako on August 9, 2013. By Issouf Sanogo (AFP/File)

BAMAKO (AFP) - Mali announced Ibrahim Boubacar Keita as its new leader on Thursday after confirming that the ex-prime minister had won a landslide victory in a presidential poll intended to give a fresh start to the conflict-scarred nation.

Figures for Sunday's second-round ballot released on live television by the interior ministry showed Keita won an overwhelming 77.6 percent of the vote, with his rival Soumaila Cisse trailing on 22.4 percent.

Mali's first election since 2007 was seen as crucial for unlocking more than $4 billion (three billion euros) pledged by international donors. Aid to the country had been halted after a separatist uprising led to a 2012 coup and an Islamist insurgency that plunged the country, then seen as one of the region's most stable democracies, into turmoil.

Former finance minister Cisse had already conceded defeat after it became apparent as early as Monday that victory was beyond his grasp.

Turnout was recorded at 45.8 percent, Interior Minister Moussa Sinko Coulibaly said, while 93,000 ballots were spoiled, compared with 400,000 in the first round.

Keita, 68, has a reputation for toughness and is known for his blunt speaking and unwillingness to compromise.

His regime begins in controversy after it emerged on Wednesday that Captain Amadou Sanogo, who led a group of fellow mid-level officers to overthrow then-president Amadou Toumani Toure on March 22 last year, had been promoted.

"My euphoria re 'quality' of Mali's democracy is waning," Robert Piper, the United Nations' regional humanitarian coordinator for the Sahel region, posted on Twitter.

And Human Rights Watch described Sanogo's elevation from captain to lieutenant-general as "outrageous."

"Sanogo and forces loyal to him have been implicated in extremely serious abuses, including arbitrary detention, enforced disappearances, attacks against journalists and torture," it said.

"Instead of being rewarded with this promotion, Sanogo should have been investigated for his alleged involvement in these acts."

During his campaign, Keita vowed to unify Mali after the humiliation of having to call on former colonial power France in January to help repel the Islamist insurgency in the north, where Al-Qaeda-linked movements seized key towns in the chaos following Sanogo's coup.

"For Mali's honour, I will bring peace and security. I will revive dialogue between all the sons of our nation and I will gather our people around the values that have built our history: dignity, integrity, courage and hard work," Keita has said.

Cisse, 63, had complained of widespread electoral fraud before conceding defeat but told reporters this week he would not challenge the result in court "in view of the fragility of the country."

The European Union observer mission gave a positive assessment of the vote while the United States has signalled that it is prepared to resume aid to Mali.

A UN peacekeeping mission of 11,200 troops and 1,400 police has been charged with ensuring security in the west African nation as France withdraws most of the 4,500 troops it deployed to tackle the insurgency.

The UN "stands ready to support the re-establishment of state authority in the north of Mali, the protection of human rights and the implementation of key reforms that will lay the foundation for sustainable peace, stability and development," said Ban's spokesman Martin Nesirky.

French President Francois Hollande's office said in statement that his country would remain an ally to a democratic Mali, adding that the size of Keita's victory margin gave him "the necessary legitimacy to undertake a national recovery."

Keita's workload will include tackling an economy battered by the crisis, as well as healing ethnic divisions in the north and managing the return of 500,000 people who were internally displaced or fled abroad during the conflict.

Widespread poverty has contributed to unrest in the desert north, with several armed groups vying for control in the void left when the Islamists fled.

The region is home to lighter-skinned Tuareg and Arab populations who accuse the sub-Saharan ethnic groups that live in the more prosperous south of marginalising them.