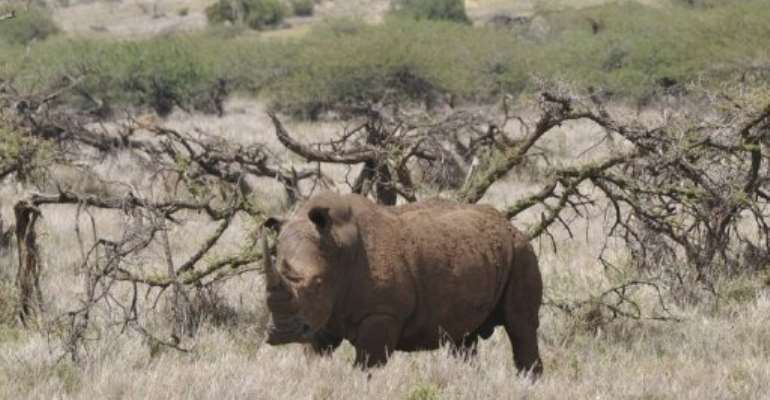 A male white rhino grazes at the Lewa Wildlife Conservancy in Kenya on November 18, 2010. By Simon Maina (AFP/File)

NAIROBI (AFP) - Gunmen have shot dead a white rhino in Nairobi's national park, a brazen raid in one of the best guarded sites in Kenya, wildlife officials said Tuesday.

Amid a surge of rhino and elephant killings across the country, the shooting of the rhino in the heavily guarded Nairobi national park -- the headquarters of the government's Kenya Wildlife Service (KWS)-- illustrates how easily poachers are decimating the country's large animals.

Poachers, who killed the rhino late Friday, hacked out the horn from its head and escaped, said KWS spokesman Paul Udoto.

"It is the first such poaching incident in the park in the last six years," Udoto said, adding it brings the total number of rhino killed this year to 35, already more than the 29 killed in Kenya in the whole of 2012.

Nairobi's national park, which lies just seven kilometres (four miles) from the tower blocks of the bustling centre, is described by KWS as "a unique ecosystem by being the only protected area in the world close to a capital city".

It is a major rhino sanctuary, and its previously believed secure environment -- fenced in for much of its 117 kilometres squared (45 miles squared) -- was seen as ideal for breeding and restocking other parks.

Poaching has risen sharply in Africa in recent years. Besides targeting rhinos, whole herds of elephants have been massacred for their ivory.

The lucrative Asian black market for rhino horn has driven a boom in poaching across Africa.

A series of large shipments of ivory has been seized in recent months, including two separate containers in Kenya's port of Mombasa in July, one with three tonnes and another of almost 1.5 tonnes of elephant ivory.

Include private tertiary institutions to absorption of fees ...
4 minutes ago