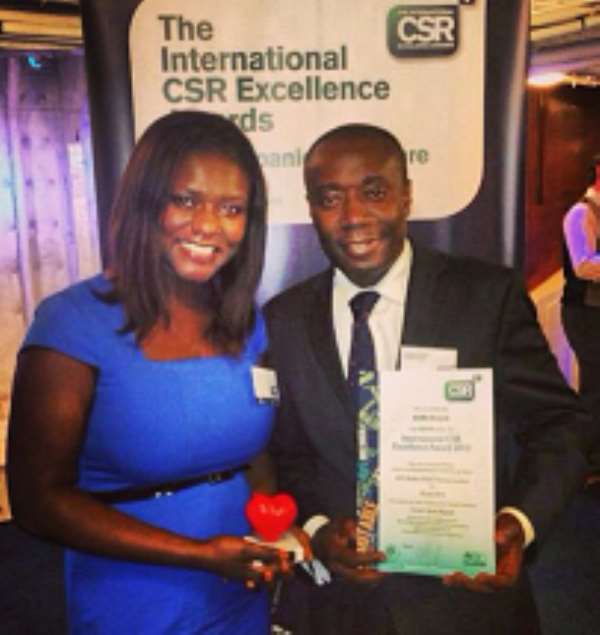 The Ghana UK Based Achievement (GUBA) Awards has been adjudged winner of the International Corporate Social Responsibility (CSR) Excellence Award held on the HMS Belfast on the 29th July 2013 in London.

A national campaign was launched to find Britain's leading companies that support and enrich their communities. GUBA emerged winners after competing with over one hundred nominees and was invited alongside other corporate organisations to receive the award.

GUBA's remarkable achievement is set to be published in the Global Guide to CSR Best Practice- the leading international work of reference on corporate social responsibility. This will serve as a bid to encourage other companies to fulfil their social responsibilities.

As an International CSR Excellence Award winner, this gives GUBA the opportunity to be recognised as a leader in corporate social responsibility and be officially honoured on November 2013 at the House of Commons with another prestigious CSR World Leader Plaque.

Undoubtedly, this will be the ultimate accolade for making a positive contribution in corporate social responsibility.

CEO and founder of GUBA Awards Dentaa, expressed gratitude for the prestigious award and stated: 'GUBA aims to make an impact within the African community by supporting and encouraging growth in business, education, sports and entertainment.

It is such an honour to be given back the recognition that ourselves as an organisation has been giving to individuals and businesses across various industries. From giving out awards to receiving awards, this only encourages GUBA to continue its good works'

The receipt of the CSR award also gives GUBA the opportunity to improve the level and standard of work being carried out by the GUBA Foundation in its mission to raise awareness about Autism.

In lieu of accolades, GUBA CEO Dentaa, was named winner of the 2013 African Women in Europe Award last month. These awards further encourage GUBA to continue to pursue excellence in all areas.

The 2013 GUBA awards ceremony is set to take place on 16th November 2013 at the Park Plaza Riverbank Hotel in London. For further information, visit www.gubaawards.co.uk

Instructively, GUBA Awards is a non-profit awards ceremony celebrating the excellent achievements of Ghanaians living in Britain and acknowledging the valuable services of UK based organizations to Ghanaians in the UK or Ghana.

GUBA Awards is in its third year and aims at extending the awards to the wider African community in the UK.