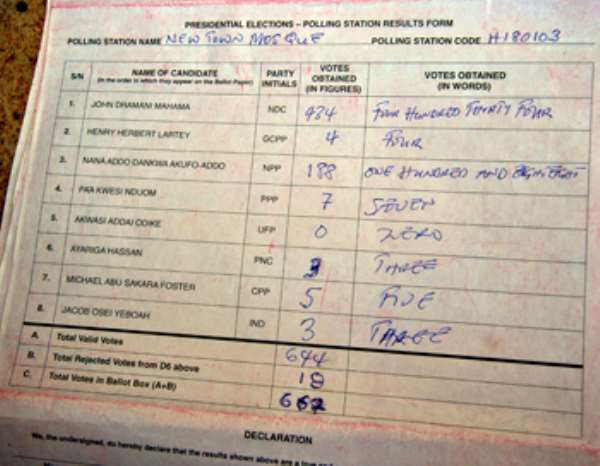 The KPMG, the accounting firm contracted by the Supreme Court to count the pink sheets submitted by the NPP with their affidavits to contest the results of the 2012 Presidential Election have finished counting the control pink sheets lodged at the offices of the presiding judge, Justice William Atuguba.

But unimpeachable information reaching me indicates that the pink sheets fell short of the NPP claimed magic number of 11,842. The total, rather came up to just 9,857 with a difference of 1,985.

This information is a huge victory for the respondents who have claimed all along that the pink sheets supplied by the NPP did not add up to 11,842.

It was this relentless protestations from the respondents which led the nine justices sitting on the case to agree to conduct an audit of the pink sheets to determine the truth or otherwise of the claim by both parties.

The KPMG, a reputed accounting firm was thus selected by the Supreme Court to conduct the audit. But on the day that KPMG, which is doing the exercise for free, decided to start counting the pink sheets, they were hit with a snag when the respondents claimed that they were each given 24 boxes of exhibits, but did not understand why the boxes of exhibits at the offices of the Registrar was 32. This led to a brief suspension of the counting with both parties heading to the Supreme Court for new directions.

It was at the SC that the justices asked the KPMG to resume the counting but asked the accounting firm to take into account the complaints of the respondents in their final report.

But the strange happenings at the offices of the Registrar was not over yet, as another box of pink sheets found its way to his office when the KPMG officials together with observers of the all the ligating parties went for the resumed counting.

When the counting was over, yet another strange thing happened when to the amazement of all, the pink sheets counted totalled 13,928 instead of the NPP's number of 11,842. This huge variance of over 2,000 pink sheets set tongues wagging with the respondents crying foul that some foreign material may have been smuggled into the offices of the Registrar.

This back and forth issue led the justices finally to agree that the pink sheets at the offices of Justice Atuguba which they initially agreed to use as the control sheets should be counted to set the records straights.

But the NPP will have nothing of this as they protested vehemently. This protest led to nowhere with the justices standing their grounds that the pink sheets at Justice Atuguba's office have to be counted at all cost.

Therefore, with the counting of the control pink sheets over and the number falling short of the NPP's magic number of 11,842, the respondents have been vindicated.

Secondly, the assertion by the respondents that foreign material may have been smuggled into the offices of the Registrar may hold water after all, because if it was the same number of pink sheets supplied to all the parties including all the nine justices of the SC, there is no way the numbers will keep changing.

The NPP have a lot of explanation to do in court. If indeed they supplied less than 11,842 pink sheets to the respondents, it puts the whole cross-examinations that have been done so far into serious question. What it means is that the respondents did the cross-examinations with less information than the petitioners have made the court to believe.

The current situation does not look too good for the petitioners and I would not want to stick my neck out by saying that this case is heading towards a total dismissal on technical grounds.