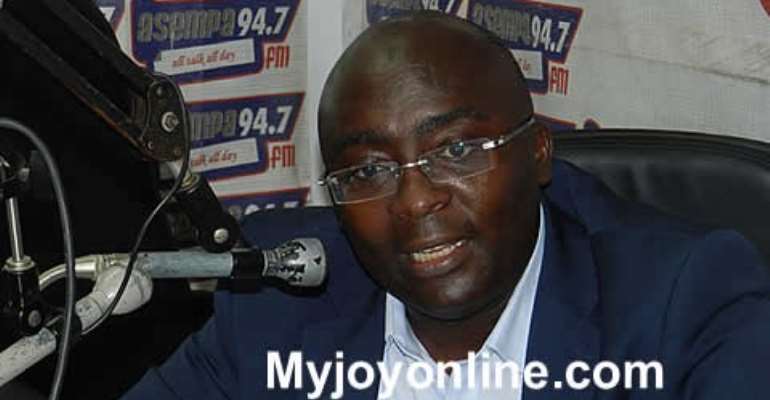 Vice Presidential candidate of the New Patriotic Party, Dr. Mahamadu Bawumia has stated that the budget deficit recorded last year which is provisionally estimated at GHC 8.7 billion can finance free secondary education for at least 8 years.

The running mate to Nana Akufo-Addo and former Deputy Governor of the Bank of Ghana bemoaned the fact that though the government had through excessive spending recorded such a high deficit, there was virtually nothing to show for the high deficit and indicated his sadness that, the government found enough money to prosecute an extravagant election campaign while at the same time claiming there was not enough money to finance the education of Ghanaian children.

These statements of Dr. Bawumia were contained in a post he made on his personal facebook page on Thursday.

The post reads “Do you know that the budget deficit incurred for 2012, provisionally estimated at GHC 8.7 billion (and likely to be much higher) can provide free senior secondary education for at least 8 years? Just think about it, we could have used this money to finance 8 years of free senior secondary school education! At least we would have had something concrete to show for such a deficit. Yet we were told that Ghana could not afford free senior secondary education. What do we really have to show for the 2012 deficit? When it comes to election campaigns we somehow find the money but not when it comes to the education of our children. So sad ! ”

He noted in his article titled “The Economy is on an unsustainable path with the Highest Budget Deficit in Ghana's History” that despite the more favorable economic opportunities prevailing currently as compared to the year 2008, the NDC failed to live up to its word of managing the economy prudently in the election year as a result of unbridled spending which has put the economy in bad shape and which inevitably would lead to dire consequences on especially Ghana's poor with hikes expected in almost all the essentials of living.

“In 2008, Ghana was not an oil producer and the global economy was in crisis. In 2012, on the other hand, Ghana was an oil producer facing a favorable external environment for its exports and yet managed to double the 2008 budget (which this government described at the time as “reckless”) and in the process achieved what is a truly unprecedented budget deficit in Ghana's history. The government promised last year that its management of the economy would be more prudent than that of other governments in previous election years. Despite all the favorable opportunities at its disposal, 2012 has turned out to be the worst election year outcome in Ghana's history in terms of the management of public finances. This is also yet another failed NDC promise,” Dr Bawumia stated.