Heads Must Roll On Gold Scam! 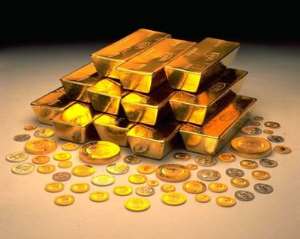 It is getting interestingly soupy. First, the spokesman for President John Dramani Mahama vehemently denied and protested that any such quantity of gold had, indeed, left the country, let alone been impounded by Turkish authorities.

You see, rather than do the "due diligence" thing by vigorously mounting an investigation into the racket, the Mahama-Arthur government chose the criminally facile way of burying its head in the sand like a peacock by blaming opposition elements of the Akufo-Addo-led New Patriotic Party (NPP) for concocting a non-existent story solely with the vicious intent of discrediting and villifying the National Democratic Congress (NDC).

And so it is rather curiously intriguing that now the Mahama-Arthur government should be claiming to have arrested two senior employees of the Geological Survey Department (GSD) of Ghana. The names of the afore-referenced suspects have been given as a Dr. Thomas Adu, deputy director of the GSD, and Mr. Justice Adom, a senior technical officer of the same department.

But as to how it came about that a humongous quantity of gold weighing 1.5 tons in soap-like bars, valued at a staggering $80 million, came to be classified and designated as non-commercial rock samples destined for testing in an Iranian laboratory is what Ghanaians ought to be worried about.


For not only does the country appear to have been royally raped by some of its own citizens in cahoots with foreigners, it does not reflect nobly on the intelligence of the men and women entrusted with the protection of our commonwealth or natural resources. But for the vigilance of the Turkish aviation authorities, this act of epic criminality would never have been discovered by the ordinary Ghanaian.

It also begins to make sense why the free laptop-distributing government of the National Democratic Congress would cynically and snootily claim that Nana Akufo-Addo's campaign manifesto of a fee-free education for all Ghanaian youths, from Pre-K through Grade 12, is fiscally untenable and downright irresponsible.

The Mahama-Arthur government evidently believes that whatever resources that may be available to the Ghanaian taxpayer, ought to be put to a far better use than merely grooming the next generation of Ghanaian leaders to take the country out of grinding poverty and into a middle-level economy.

And what better use, of course, than to have our gold and other mineral resources massively siphoned out of the country to generously enrich the coffers of the medieval theocracy and terror-mongering "Republic" of Iran?


I am especially intrigued by the fact that the Turkish plane reportedly carrying the 1.5 tons of Ghanaian gold originated from the Libyan capital of Tripoli. Anybody who has followed the history of the key operatives of the National Democratic Congress knows that Libya is the political equivalent of Mecca in the playbook of the Rawlings-minted political juggernaut.

Couple the foregoing with the fact of recently learning that, indeed, sometime between November and December 2012, President Mahama dispatched the infamous Capt. Kojo Tsikata to hold forth with Iran's President Ahmed Amadinejad (or some such name) and the entire chip of the concatenation of this $80 million epic racket begins to fall smack-dab in place.


What is important to reckon here, though, regards the critical question of when this humongous cache of gold bars illegally acquired and evidently squirreled out of the country on the red-eye will be returned to their rightful owners - the well-meaning, diligent and long-suffering people of Ghana.

We, of course, ought to be darn deathly worried about this aspect of the racket, or rather epic-heist, knowing what we already know about the Woyome Scandal, and particularly the airtight public support that both Messrs. Atta-Mills (of blessed memory) and Mahama accorded this nonesuch criminal suspect in the annals of postcolonial Ghana.

You may not like to "hear" about the following, dear reader, but there eerily appears to be a Trokosi - call it Anlo-Mafia and Fante-Confederate - angle to this epic heist in the form of two gentlemen, respectively, named Messrs. Peter Bedzrah and Frederick Kojo Essuman who, we are told, operate under the corporate identity of Omanye Gold Mining Ltd., who were actually involved in a bizarre transaction to supply gold to a presumed Iranian national called Mr. Vahid [Wahid?] Moradi Moghaddam.

Whatever be the case, it clearly appears that designating this humongous quantity of gold contraband as "laboratory samples" enabled Messrs. Bedzrah and Essumang to ship their contraband out of the country gratis, that is, without having to settle accounts with the Customs and Excise Department at the Kotoka International Airport. Wow!


Dear reader, if you care to know, then let me tell you in plain and simple English: This is veritably the "Better Ghana Agenda" that Messrs. Dramani Mahama and Amissah-Arthur have been deafeningly drumming into the ears of unsuspecting Ghanaians since Dr. Kwadwo Afari-Gyan criminally massaged the outcome of Election 2012 in order to impose the blood-dripping National Democratic Congress on our pates!
________________________________________________
*Kwame Okoampa-Ahoofe, Jr., Ph.D.
Department of English
Nassau Community College of SUNY
Garden City, New York
###