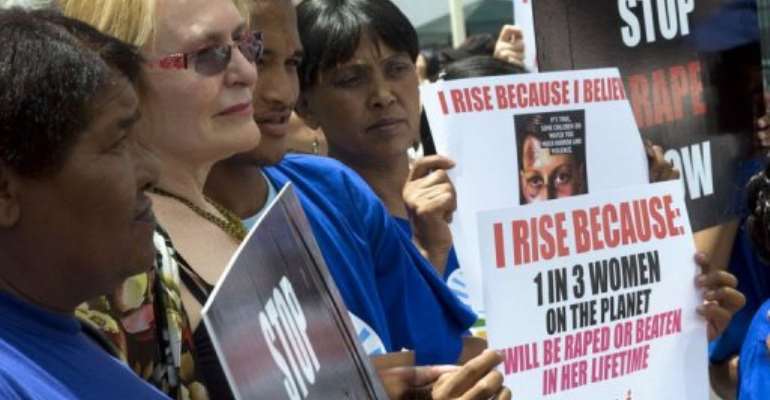 CAPE TOWN (AFP) - South African prosecutors will oppose bail and seek a maximum sentence of life in prison for two men accused of the murder, gang rape and disembowelment of a teenage girl, a spokesman said Monday.

The case against one of the accused Johannes Kana, 21, was rolled over in the small town of Bredasdorp until Tuesday when he will appear with co-accused Jonathan Davids, 22.

"They are going to appear tomorrow together," said Eric Ntabazalila, regional spokesman for the National Prosecuting Authority.

"It's likely to be postponed because the investigation is still at an early stage. But if they do try to apply for bail, as the state we will oppose bail."

In a case that has shocked even crime-weary South Africans, Kana is accused of taking part in the horrific attack on Anene Booysen, 17, in the town, which lies around 180 kilometres east of Cape Town.

The teenager was found at a construction site after her attackers reportedly slit open her stomach, took out her intestines and broke her legs.

Booysen was buried at the weekend after dying in hospital. Hundreds of mourners attended the funeral.

The two accused will face charges of murder and rape but are unlikely to be formally charged on Tuesday, said Ntabazalila.

Following standard practice the state will also be seeking a maximum sentence of life imprisonment for Booysen's attack, "especially considering how gruesome the murder was", he said.

Kana's appearance drew considerable public attention, with onlookers peering through a courtroom window to see him.

Inside the packed courtroom, the victim's family had winced when hearing that a sharp knife was used in the assault, the Sapa agency reported.

A third person was released as there was no evidence linking him to the case.

Around 65,000 sexual offences were committed in South Africa last year, according to official figures.