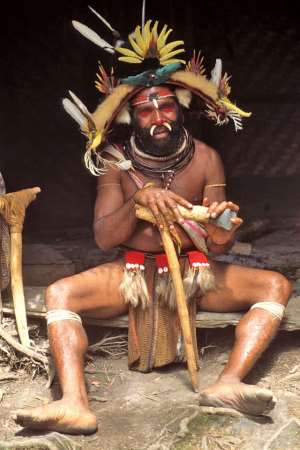 As the African Cup of Nations (AFCON) gets underway in South Africa, it is pertinent to critically examine the role of witchcraft in African football. In sub Saharan Africa, it is widely believed that magic can affect the performance of players, that juju, charms or muti can influence the outcome of matches.

Though many Africans acknowledge the importance of coaching and technical skills, talent, training and team spirit etc in football, they also believe these are not enough, and that some 'magical abracadabra' by a witch-doctor or marabou, is needed to compliment a team's effort to secure a victory. Before embarking on major tournaments, some players and team officials consult witchdoctors and spiritualists.

The witch-doctors subject them to some rituals or supply them with charms or muti which they rub on their bodies, carry with them or bury on the pitch. At the 2002 AFCON, the former goalkeeper of Cameroun, Thomas Nkono, was caught:

“burying bones under the turf and spraying a strange elixir, in order to cast a spell on the playing field' before a crucial semi final match with Zambia. He was arrested and detained by the police.

In fact some teams go to the extent of contracting and having witchdoctors as part of the contigent.

In most cases, the witch-doctors operate secretly. But sometimes they openly and publicly display their magical wares during matches to frighten their opponents. There are claims in some African countries that a local medicine man can make a team score a goal by making the players of an opposing team weak and lacking the energy to play. It is also claimed that they can prevent the goalkeeper from catching a ball by turning it into a big stone or a frightful object.

I would ask teams that have fallen out of the current tournament in South Africa: Where is the sting of your juju, charms, magic and muti? Where are your witchdoctors, spiritualists and marabous?

At the ongoing soccer fiesta in South Africa, the team Burkina Faso has a witch doctor on the grounds. He came with his full magical 'regalia and paraphenalia'. Now, does that mean that Burkina Faso will win this year's AFCON? The occult doctor with all his powers has not said so.

(Watch the interview here.) In fact none of the the continent's witch doctors including thousands of Sangomas in South Africa have made any specific statement at this stage about who will win this year's AFCON, the numbers of goals the team will score or who will score them.

Does that not speak volumes about the assumed 'power of witchcraft' in African football? Why have many Africans refused to question the so called power of juju and magic in the game? Why can't we Africans begin to think critically about the purported role of the occult in our lives?

Explaining how he could use witchcraft and magic to secure victory for his team, a local magician in Cameroun once said, “All I have to do is cast a few shells and contact the spirit of the playing field, then our own goal will be nailed up and the opposition's goal will be wide open,"

And one wonders why this magician did not use his spells to make Cameroun qualify for the 2013 AFCON. If witchcraft is as potent as most Africans believe, it should be provable beyond a reasonable doubt. According to their claims, witchdoctors should be able to specifically predicting the team that will win or lose and by which number of goals.

I personally challenge all African witchdoctors including the Sangomas in South Africa, the pastors ad prophets like T.B Joshua, to come forward and predict specifically which team and country will win this year's AFCON. They should come out and tell us who will score the first goal and at what time. This challenge is important in order to get people across the region to abandon this superstitious belief.

Apparently belief in juju, charms and witchcraft have become a liability to the African football and mentality. Players and team officials need to focus their energy and resources on what matters, what evidently works and is effective. There is no evidence at all that witchcraft, juju or charms, prayers or rituals can make a team win a match.

We need to combat the exploitation by charlatans and purveyors of magical wares. Thousands of witchdoctors exist and operate across Africa. So much money is spent in consulting and contracting them by sports officials. This is money that could be better utilized in improving training techniques and hiring good coaches and players.

In 2012, Ghana's former Coach, Goran Stevanovic, attributed the country's failure to win the Cup of Nations to witchcraft accusations among the players. He stressed the need to help change the mentality of the players about using'black power' to destroy themselves. Going by his statement, witchcraft tantamounts to black power. And if one may ask, black power to do what? Lose a match?

The author has 264 publications published on Modern Ghana.