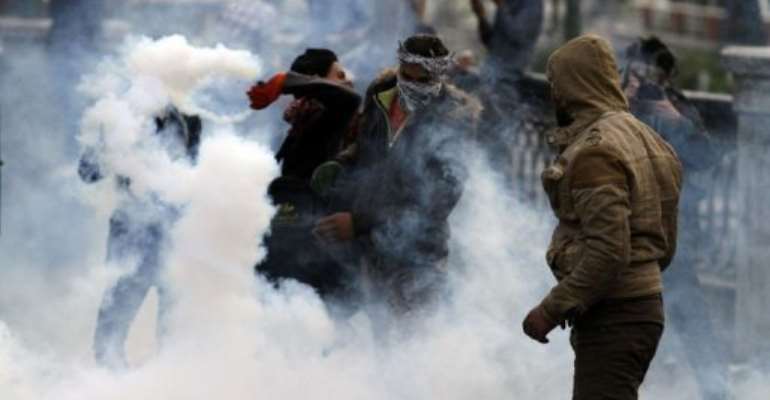 An Egyptian protester throws a tear gas canister back towards riot police during clashes in Cairo on January 29, 2013. By Mohammed Abed (AFP)

CAIRO (AFP) - Egyptian opposition leaders on Wednesday called for urgent talks on the political crisis gripping the country, as a fresh eruption of violence killed two more people in Cairo.

Mohamed ElBaradei, a leading figure in the National Salvation Front, called for the talks just two days after the opposition had rejected Islamist President Mohamed Morsi's call for dialogue.

"We want an immediate meeting between the president, the ministers of defence and interior, the ruling party, the Salafist movement and the National Salvation Front to take urgent measures to end the violence and begin a serious dialogue," ElBaradei said in a tweet.

Former Arab League chief Amr Mussa, another NSF leader, said "the serious current situation" required the acceptance of dialogue "in order to stop the confrontations and the violence."

It was not immediately clear whether this represented a step back by the NSF, which had been demanding the formation of a national salvation government and the amendment of the Islamist-drafted constitution, before agreeing to any talks.

But Khaled Dawoud, spokesman for ElBaradei's Al-Dustur party, said ElBaradei's Twitter statement was a "denial of all the claims by the presidency that we reject dialogue.

"We are looking for a way out of this (crisis) because we're extremely worried."

The latest round of unrest began with protests marking the second anniversary of the Egyptian uprising on Friday, and took a violent turn a day later after a court sentenced 21 residents of Port Said to death over football related violence last year.

Anger on the streets has been directed primarily at Morsi, who is accused of betraying the revolution that brought him to power and of consolidating power in the hands of his Muslim Brotherhood.

The protests have also underscored long-standing tensions between protesters and the police, a force long accused of abuse.

In Cairo, two people were killed near Tahrir Square Wednesday. Their identities were not immediately known, but medics said they had both been hit by buckshot.

Their deaths bring to four the number of people killed in Cairo and to 54 the nationwide total since violence erupted late Thursday, prompting Egypt's defence minister to warn that the crisis could lead to the collapse of the state.

"The continuing conflict between political forces and their differences concerning the management of the country could lead to a collapse of the state and threaten future generations," General Abdel Fattah al-Sissi said on Tuesday.

Most of the deaths have been in Port Said, where clashes erupted on Saturday after a court issued death sentences against 21 supporters of local football club Al-Masry for their role in deadly riots last year.

Meanwhile, the NSF indicated that some of its leaders would meet during the day with representatives of the main Salafist party, Al-Nour, in response to an invitation from the ultra-conservative Islamist group to discuss the "deterioration of the situation."

As the call for talks was made, Morsi was in Berlin for talks with Chancellor Angela Merkel on a visit that had been shortened from two days to just a few hours because of the unrest at home.

The visit, Morsi's first to Germany since he was elected in June, will centre on bilateral cooperation as well as the situation in Egypt, state news agency MENA said.

MENA said he is to meet with business people as well as Merkel.

Berlin's offer of help "depends on advances in the democratic development in Egypt", Guido Westerwelle said on ARD public television.

"These last days we have seen some terrible pictures, images of violence and destruction," Westerwelle said, calling for dialogue between the Egyptian government and opposition.

On Tuesday, France's presidency said Morsi had postponed an official visit this week. He had been due to meet French President Francois Hollande on Friday, when the Egyptian opposition has called for rallies.

Morsi took over last year from an interim military administration in charge since the February 2011 overthrow of Hosni Mubarak, who ruled the country for three decades.