Zambia out to settle old scores with Nigeria 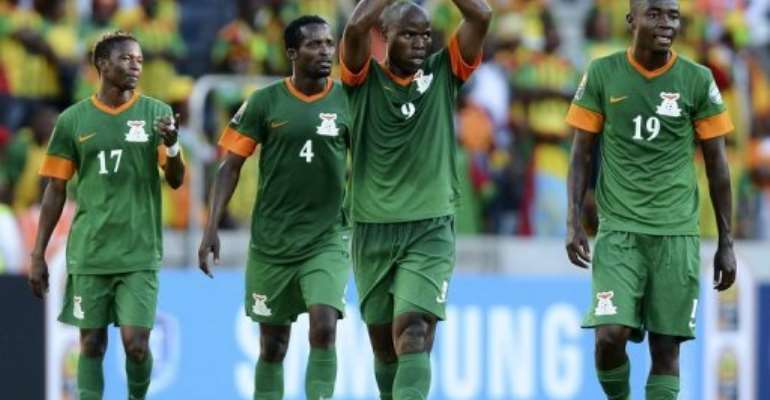 Zambia's Collins Mbesum (2nd R) celebrates after scoring a goal against Ethiopia on January 21, 2013 at the Africa Cup. By Francisco Leong (AFP/File)

NELSPRUIT, South Africa (AFP) - Champions Zambia and Nigeria clash on Friday in a Group B tie both teams are desperate to win after failing to fire in their opening games.

For Herve Renard's Zambians, surprisingly held 1-1 by Ethiopia in their first run-out, there is additional motivation as they come up against a Super Eagles side that dumped them out of the 2010 Nations Cup.

In Angola three years ago, Nigeria prevailed on penalties after a goalless draw.

And 19 years ago, the west African giants beat Zambia to claim their second title.

This is the fifth time the pair have met at the competition, with Nigeria holding the upper hand with three wins to Zambia's one.

The duo were the pre-tournament favourites to make it out of Group C, but with Nigeria also being subjected to a 1-1 stalemate by Burkina Faso, the mini-league has been thrown wide open.

What's clear is that a positive outcome for either team in Nelspruit will greatly enhance their chances of avoiding an embarrassing first-round eviction.

Zambia, shock winners of the 2012 Cup, are sweating on the fitness of Chisamba Lungu, who suffered an ankle injury when floored by Ethiopian goalkeeper Jemal Tassew last Monday.

"Chances of playing against Nigeria are 90 percent, but could drop to zero if he continues to feel pain on Thursday," Football Association of Zambia (FAZ) spokesman Erick Mwanza disclosed.

Renard's men were fortunate to emerge from their curtain-raiser with a point as Ethiopia had a penalty saved by Kennedy Mweene.

The Frenchman shouldered the blame for the faltering start to the title defence.

"Our fans expected more than we delivered, and they are right. Today, it was the fault of the coach. I did not prepare the team well to start the competition -- we'll see how things go after the third game."

Zambia captain and striker Christopher Katongo was dissatisfied with his team.

"We are not under any pressure, but we acknowledge that after this game (Ethiopia) we need to improve and work harder and that, for sure, we will do.

"As defending champions, it was not a fair result to get."

Kalusha Bwalya, named player of the tournament when Zambia came third at the 1996 Nations Cup in South Africa, spelt out what spurs the Chipolopolo (Copper Bullets) 12 months after their heroics in Gabon/Equatorial Guinea.

"We want to be multiple AFCON winners and there is the Confederations Cup later on in the year in Brazil, which as a team we would like to be at and, of course, the 2014 World Cup itself.

"We are building a team to compete at the top level and in major competitions so, basically, it's work in progress and we are not stopping in our efforts to achieve even more success."

Twice former champions Nigeria, back after missing out last year, were set fair to beat Burkina Faso after Emmanuel Emenike gave them a first-half lead.

But they made life hard for themselves when Celtic defender Efe Ambrose was sent off for a second yellow card and Alain Traore levelled in the fourth minute of stoppage time.

"This game is gone and the next against Zambia is very, very important. I'll pick up the players and motivate them," vowed coach Stephen Keshi.