NPP is a Chameleon on Free Senior High School Education 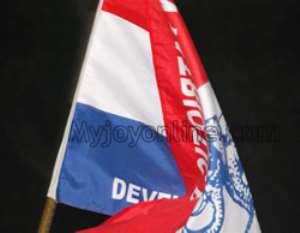 It is a good thing that the New Patriotic Party Presidential Candidate, Nana Akuffo Addo has come up with the idea that, under his administration, Ghana will have a Free Senior High School System beginning in September 2013. I however, have issues with this idea since it was announced by Nana Akuffo Addo.

First, when he announced the idea, he said under his administration, children in Ghana will go to senior high school for free. Then came the problems with the cost and date when it will start. Several months later, he told the world in an IEA meeting that it will cost Ghana 78 million Ghana Cedis and that the program will start in September 2013. (Please note that he would be sworn-in January 2013)

Several weeks later, there was a statement released by National Union of Ghana Students (NUGS) which stated that, what Ghana needs now is not Free High School Education, but Quality High School Education. This means an education that would give the children a better opportunity of becoming who they want to be. Not a Free Quantity Education the NPP is promising Ghanaians.

Two days after the NUGS statement, Dr. Bawumia, the Vice Presidential Candidate for NPP in his tour of the Northern Region, told some chiefs and people that what NPP would offer them is Free and Quality High School Education and that the two are possible under the NPP administration. I want the reader to pay attention to the addition of the Free High School Education. - “Quality”

This is where I have problem with the NPP. They change their educational message as soon as someone says that is what Ghana needs now. It started with free senior high school education and it is now Free, Quality, Affordable, Accessible Senior High Education. This is clear manifestation of desperation and frustration. The NPP is so desperate for power that they will want to tell Ghanaians what they (Ghanaians) want to hear. The NPP themselves know that Fee, Quality, Affordable and Accessible Senior High Education in September 2013 is just not possible yet, they are selling it to the people of Ghana.

The NPP want to win power only to turn around and tell Ghanaians that when they took office, there was no money to even pay the wages and salaries of workers, let alone to send children to senior high school for free. The NPP is a chameleon on Free Senior High School Education and cannot be trusted. Ghanaians should reject this campaign propaganda before they will bite their fingers. It will be too late by then and they will have to deal with the worst four years of their lives under the NPP administration.

“The NPP left a big mess for the NDC. They think the NDC is not cleaning it fast enough and so they want to come back and continue with the same mess”