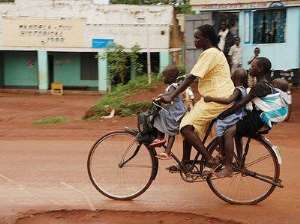 Prior to our self-determination from when the colonial masters were in charge of our destiny, it is not uncommon to hear parents in the elite class of the Gold Coast priding themselves by such expression as “My son is schooling in the Whiteman's country”. This is a mark of standard of how rich such individuals are as education in the far away land of the Whiteman is not only exclusive, expensive but also extraordinary. It is an indication of how classy, superior and closer to the Whiteman the individual is.

In those days, education on our land is just for the commoners designed for those being prepared to be the hewers of the tree and tillers of the land. Our educational institutions were meant to produce the kind of labour that forever shall be labourers and only good enough to do the Whiteman's dirty job. The ploy was never for us to be good enough, just as our masters are, to the extent of taking our destiny into their own hands. Their educational system for us was meant tohave us remain subservient to the colonial masters than to challenge the authority of the Whiteman. Just like the donkeys that work in partnership with the owners, our masters' everlasting aim was to sustain the statuesque that shall be allowing our children and our raw materials to be at their mercy.

Our attainment of independence in 1957 that come at the cost of lives of our brave brothers and sisters was to take our own destiny into our own hands by doing away with the MASTERS and deciding the kind of education every one of our children shall be having. We swore that every child shall have the best education to the fullest of his/her potential on our own land without discirmination. We swore for the myth of the Whiteman's land education to be a thing of the past. We swore that the system of the colonial White master, who collects tax from all the citizens of the Gold Coast only to provide them with local education of slaves while the majority of our children dream of better schools in faraway land of the colonial master, shall be a thing of the past.

Listening to an audio interview on Joy Online, the Ghanaian Vice-Presidential nominee Paa Kwasi Amissah-Arthur boosted of having a “son who is an epidemiologist and a medical doctor working in the NHS, Uk and a daughter who is also a lawyers in training”, possibly also in the United Kingdom. http://newsaudio.myjoyonline.com/pages/newsaudio/201208/299.php. On the same audio, Kwasi Amissah-Arthur confirmed that he was invited for interrogation by the BNI and the Police headquarters on allegation of corruption that could not resulted in prosecution for lack of enough evidence.

In giving his own life history and the educational experience in particular, it was very obvious that Amissah-Arthur's education was funded mainly by the Ghanaian tax payer. In addition to his education, Mr. Ammisah worked mainly for the government of Ghana. He worked in the academic sector, served as a deputy minister of finance and then run a private consultant before ending up as a governor of the Bank of Ghana.

The main fact is that Paa Kwasi Amissah-Arthur worked for the state of Ghana to better the lives of Ghanaians for which he was paid salary by the state of Ghana. The state of Ghana trained Arthur-Amissah into an Economist of the highest standard with the tax payer's money and paid him salary to work for the state with his gained knowledge and experience for generations after him to benefit as well. He was tasked with the responsibility of occupying the position of the governorship of Bank of Ghana that comes with managing the fiscal and monetary instruments of the state.

The job here was to manage the economic factors beyond personal interest to reflect in every facet of the economy. The reality however turned out to be that of individuals becoming richer while the state gets poorer. An obvious evidence of conflict of interest that our public officers swore against in their oath of office. For over twenty years of being in and out of the state management, the nation's affairs decayed so much that even Paa Kwasi Amissah could not keep his own children and grand-children in the Ghanaian system, much as he loved them.

In my recent visit to my primary school, Kanda Primary, I just could not hold back the tears from my eyes at the condition in which I found the leaders of tomorrow who were said to be learning. The memories of my own school days there kept coming to mind. In my own son's school, I know within me that things are demn bad. My imagination of the effort the British government daily put into the education of their youth explained why people like Arthur Amissah have to snake out their children into such foreign schools while they help with the subject of the colonies to be what exactly the colonial master wanted them to be.

The question is that, was Arthur Ammisah at any point in time a resident in the UK for one to say he had this children while there? If the answer is no, then the children will not be said to be in the UK as British citizens and therefore will be paying their tuition fees as foreign students and in hard currency. Or coud Mr. Ammisah have snicked into UK with his wife to give birth to his children and then back to Ghana to do the harm? If Mr. Amissah was not paying for his children fees, then could it be the government of Ghana paying for the children of those who are supposed to making the schools of Ghana better, braod?

I will want to position myself on the account that Mr. Arthur Amissah, like most Ghanaian elites, was the one paying for the tuition fee of his children. This then means we have a state of Ghana that is incapable of financing the education of its own citizens while the employees of the state are more than capable of financing the education of their children abroad. This then means in Ghana the citizen is becoming richer than the state. The tax payer is now richer than the tax collector. “Economic Mystery”, some mates of my will say!

We are here askig if it is alright for one to be comfortable with a state in which the majority of the tax payers are paying their tax to the state while some very few people, directly or indirectly, employed by the state are getting richer than the state. Yes, they are richer than the state and that is the reason why individual like Arthur-Amissah sees nothing wrong in being able to afford expensive education for their children abroad while making such money from running the affairs of those who cannot afford a three square meal for their children and roof over their heads.

The argument here is which money are these people using to educate their children abroad while they live and work in Ghana for the poor government of Ghana? Money is a scarce resource with limitations in its allocations. It operates along the principles of best alternative decision. So decision for the use of money in one thing means no decision or foregoing the employment of the same money in the affordability of another thing.

The decision of the allocation of the tax payer's money in Ghana has been the duty of individuals like Paa Kwasi Amissah-Arthur who were also face with the decision of getting the best education for their own children. The evidence on the ground was that he choose to educate his children in the best schools in the UK at the coast of the over 4,000 schools in Ghana under threes.

On a UK radio Voice of Africa www.voiceofafricaradio.com between 8am to 10am, the 13th of August 2012, I did searched for a better words to describe this kind of inhumane behaviour and the best suitable was “a thief”. It is only a thief that can be richer than his country and in this case, those who see nothing wrong in managing a nation with rotten educational system where children school under trees while their own children are schooling abroad, are doing nothing but stealing the money.

The interesting thing about this is that the brains of those managing the affairs of our nation are so decay that they see nothing wrong with going for the best for themselves and their families at the cost of the state. In fact they have taken the oppressed masses of Ghana for nothing that they do all these nonsense and reward themselves generously as well. They appeal to us to work harder to be like them, when in reality they are fully aware that we are just being misled because they know it is all a pack of lie.

This attitude is anti-democratic. It abuses the intelligence of the majority of the people as no single person goes out to cast his/her vote for some few elected people to be educating their children broad. We cast our vote for the best school for everyone in Ghana and not for the children of some few in the UK. We pay our tax for the good of everyone and not for monsters to send their children abroad for better life.

The education of every citizen into a better citizen start from birth. The culture of giving some children a different education from others means giving some citizens advantage over others and limiting ourselves in human potentials. For the policitians like Pa Kawsi Arthur-Amissah to understand that it is the reponsibility of the politician to make sure our schools are properly managed and of the best standard, making the kind of school the politician son goes a political issue is very important. If all politicians are made to understand that appealling to the people to run efficient state institution also means the kind of condifence such individuals have in the institutions by patronizing the same facilities i.e politicians boosting of their children going to the same school as everyone else, we will be changing our basic educations. Is this not the same kind of political spirit that Arthur-Amissah grew in?

Now, if we really want our independence to mean something sensible for everyone and our education to be that of a free people that every one of our children will go to school with dignity, then we must find a way of relieving monsters who can not put their children in our public schools. If they can not go to the same school with us the we have to relieve them from managing our destiny. It cannot continue to be about them alone but about everyone.