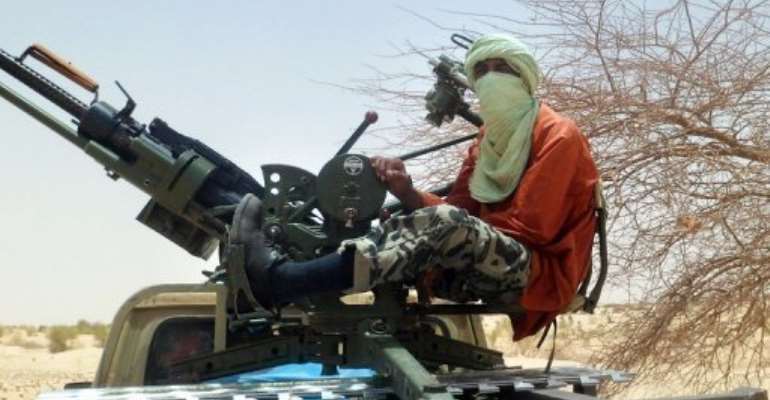 Tuareg rebels fought alongside Ansar Dine in January to conquer the entire northern half of Mali. By Romaric Ollo Hien (AFP/File)

BAMAKO (AFP) - Mali's Tuareg rebels clashed overnight with their former Islamist allies, witnesses said Friday, after the two groups fell out over forming a breakaway state in the northern desert region they control.

The clash involving automatic weapons near the remote regional capital Kidal was the first between the rebel National Liberation Movement of Azawad (MNLA) and the Islamist Ansar Dine.

Both groups are made up of Tuareg tribesmen from different various clans and the fighting has raised fears of widening chaos in the vast northern swathe of the country.

The rebel forces seized the region with little resistance from Malian government forces seizing the initiative after officers in the southern capital Bamako seized power in a March 22 coup.

The rival northern groups belong to different Tuareg tribes -- Taghat Melet and Idnane for the MNLA and Ifora for Ansar Dine (Defenders of Faith) -- and hold separate ideologies and objectives, observers say.

"The crisis is becoming tribal. After having fought the Malian army together ... the two groups are now fighting on a tribal basis. It's very dangerous," Maiga said.

Calm had returned by dawn Friday, an official said, but he noted that several MNLA flags had been removed from around the city.

The MNLA, calling itself "resolutely secular," said last Friday they had rejected a deal with Ansar Dine to form a breakaway state in northern Mali called Azawad -- an area larger than France -- because of their insistence on implementing sharia, or radical Islamic law.

An Ansar Dine fighter, Mohamed Ag Mamoud, said by satellite phone late Thursday that the clash had broken out because "all week, the MNLA was manipulating civilians in Kidal to demonstrate" against Ansar Dine, which is believed to be backed by Al Qaeda's north African branch.

"They encouraged women and children to demonstrate against us. Now we will show them our strength," Mamoud said.

"We have been attacked, we will respond," said Moussa Salam of the MNLA, for his part, asserting that the Tuareg rebels "even attacked the home of Iyad Ag Ghaly," the head of Ansar Dine and a Tuareg born in Kidal.

Tuesday and Wednesday saw demonstrations by Kidal residents, mainly women and children, against the presence of Islamists and in support of the MNLA. The Tuesday protest was violently dispersed.

Meanwhile on Thursday residents of Timbuktu said they have launched an armed group to kick out the Islamists currently controlling the ancient city.

The Patriots' Resistance Movement for the Liberation of Timbuktu opposes the secession of northern Mali and "will engage in military action against the invaders until they leave," said Hamidou Maiga, an ex-army lieutenant.

Timbuktu, home to priceless ancient Muslim scriptures and mosques, fell to the rebels after the coup.

Officials from the African Union, the west African grouping ECOWAS and the United Nations agreed Thursday on the need for the AU to make "a formal request" for UN backing for intervention to re-establish Mali's territorial integrity.

The UN, AU and ECOWAS officials also called Thursday for the immediate dissolution of the former junta which came to power following the coup by low-ranking officers.

They want them to take no further part in the country's transition.

The putschists have officially ceded power to interim authorities but remain omnipresent.