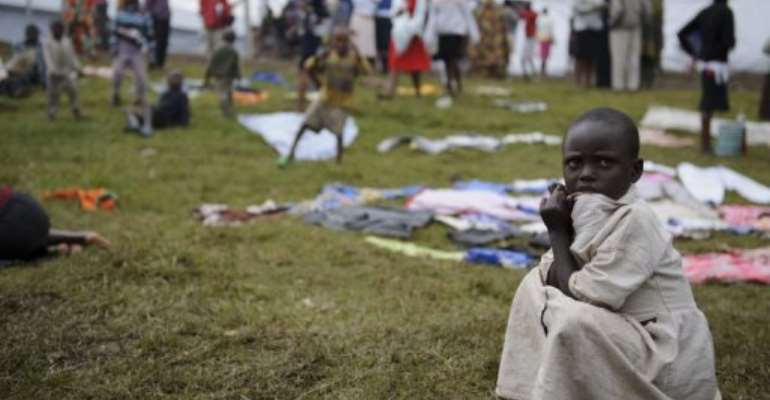 Clashes between the Democratic Republic of Congo and army mutineers are concentrated near the Rwanda border. By Phil Moore (AFP/File)

KINSHASA (AFP) - Rwandan citizens have been recruited and trained to fight in support of army mutineers in neighbouring Democratic Republic of Congo, according to a confidential UN report obtained by the BBC.

"The United Nations has conducted interviews with 11 combatants who abandoned their positions in the mountainous forests on the border between the DRC and Rwanda.

"The report (...) describes these deserters as Rwandan citizens recruited in Rwanda on the pretext of joining the national army, including a minor," the BBC said.

"They said they were recruited in a village called Mundede, that they received training in handling weapons and that they were sent to the DRC to join M23," Hiroute Guebre-Selassie, bureau chief of the UN mission in the DR Congo (Monusco) in Goma, the capital of Nord-Kivu province, told the BBC.

The March 23 Movement (M23) is formed of army mutineers who were part of the former rebel National Congress for the Defence of the People (CNDP), a Congolese Tutsi force that Rwanda denied supporting when it was waging its insurgency.

CNDP members were integrated into the army under peace accords signed with Kinshasa in 2009. Large numbers of mutineers defected this year, claiming bad treatment and demanding full implementation of the peace deal.

"Certain combatants stated that (the Rwandans) were recruited as of February," according to the BBC.

Clashes between the DR Congo army and M23, which was created on May 6, are concentrated in the Rutshuru territory, north of Goma, in an area close to the border with Rwanda and Uganda.

"The UN mission in DR Congo is lying; they have not verified anything; they are repeating claims and rumours that we, the Rwandan government, have heard over the last many weeks," Mushikiwabo told the Network Africa programme.

DR Congo troops have received reinforcements from several other provinces. Given the army's difficulty in putting down the mutiny, Prime Minister Augustin Matata Ponyo last Wednesday hinted that the ex-CNDP forces had a "rear base in a neighbouring country", without naming one.

"It's not impossible that we are up against provocation by people who want further to disturb the situation by creating problems between Rwanda and us," DR Congo government spokesman Lambert Mende said.

"Verification is under way, but a priori we have no element that can confirm such accusations."

Howver a Congolese army colonel taking part in the fighting backed the claim that Rwanda was supporting the insurgents.

"Fifteen mutineers have surrendered up until today, including seven Rwandans. They gave evidence that Rwanda was giving them reinforcements. We said it long ago: Rwanda is backing them in ammunition, heavy weaponry and even with troops," he told AFP.

"M23 couldn't resist for all these days of fighting without the support of Rwanda," he added. "How many men are they, to be able to hold out as long as this?"

Those captured were taken to a military command centre, where senior officers would decide what to do with them, he said.

M23 spokesman Lieutenant-Colonel Vianney Kazarama denied that his forces were getting any support from Rwanda.

"If Rwanda backed us, we would rapidly go a long way today because it (Rwanda) has an organised army and a very strong one. However, we only just have a foothold in the Rutshuru," Kazarama told AFP.